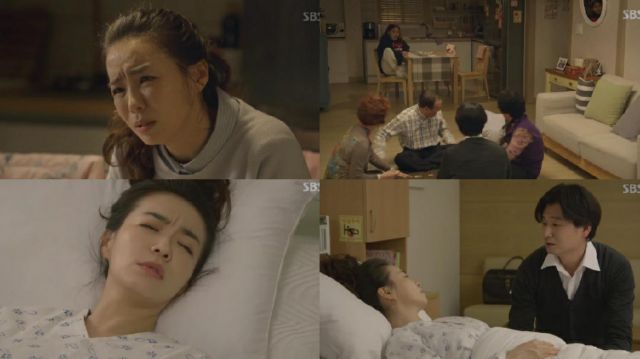 After a couple of fairly strong episodes last week about lost dreams and obsessing over the teenage daughter's boyfriend, "Strong Family" is on weaker footing here with a storyline about annoying relatives refusing to leave the house because they're too busy gambling and annoying interns not knowing when to be quiet and stop pestering the regular employees. Or I don't know, maybe it's just me that thinks this is weaker ground, since I've never had to deal with those specific problems personally.

In further fairness, the gambling relatives are really more of a comedic capstone to Ra-yeon's overall stressful situation of both being sick and having to manage a large amount of familial cooking obligations at the same time. The levity is rather necessary- while "Strong Family" tries to put a smiling face on Ra-yeon's predicament with the bait-and-switch parody opening, the fact remains that Ra-yeon's lack of support is troubling.

Even so, we still have that usual awww they really do love each other moment at the hospital bed near the end. "Strong Family" always manages to have that much going for it- the drama shows us a lot of varying levels of friendship, love, and general respect and differentiates them quite well. Even at their meanest the characters are pretty good at negotiating with each other- note the very quintessentially Korean offering scene.

As for the interns, nothing they do or say is really all that awful. I think I was just a little miffed on general principle that their existence takes precious screen time away from Jeong-min, who gives a couple of mean looks from those thick glasses and that's all we really get from her this time. The overall point about the importance of properly adjusting to mild changes in an office work environment is well-noted. Seok-moon (played by Uhm Hyo-sup) is the perfect boss for these moments because he's able to take just about any situation with the same mild smirk.

It's one of the weaknesses of the format of "Strong Family" really- I get used to the little character quirks and gimmicks that any time the drama tries to introduce new ones I get impatient for the comfort of the old ones. None of the guest stars this time around impressed me all that much, which is a problem since it just reminds me of previous better guest stars. Well, there's always the next go around.