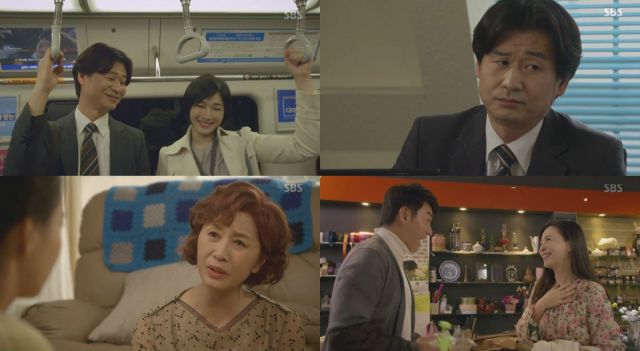 For the first time, Cheon-il uses his tracksuit for its intended purpose- as workout clothes, in anticipation of the big company athletic competition which he ends up taking far, far too aggressively. I was a little disappointed that Cheon-il's training montage is just general athletics. It would have made for a much funnier overall joke if Cheon-il had been taking mixed martial arts lessons and his performance on the field was a result of his mis-applying those skills in the wrong context.

Elsewhere, Ik-hee starts taking private tutoring lessons on the behest of her mother, which predictably backfires since Ik-hee made very clear her desire to continue going to a private classroom rather than take prviate lessons. This story was noteworthy to me mainly because the tutor is played by Park Jin-joo, an actress I rather like even though she has trouble getting anything better than third tier roles. Still, Ik-hee's rude albeit reasonable question about employment prospects was fairly funny.

Next, the eighteenth episode presents a more unified theme where it comes to first loves. All three of the principal characters have first loves, after all, even if Ik-hee is still in the middle of hers. But what I rather liked was the ambiguity at play as to what constitutes a "first love". Logically, that would seem to be the first person you are in love with, and that requires mutual recognition of feelings, and presumably a relationship-ending event beyond the couple's control.

By that definition, though, the first love for a lot of people is just their first serious relationship. So what about someone you just had a romantic crush on way back when? Does that count? Well, as "Strong Family" shows us, while it can count on the technical level, it probably shouldn't, because the person you had a crush on may well have just been a total jerk. So really, the whole first love idea is really more about random nostalgia than anything that should warrant further serious thought.

The ideas at play in the eighteenth episode are fairly interesting, and even dovetail well with the jokes being made, although the emotional core is what's really sweet. I especially liked the line about the last love. It is funny how no one ever talks about that so much. So once more "Strong Family" is as it always is- a fairly rote domestic comedy that wonders, some times more effectively than others, about the meaning of a normal life.