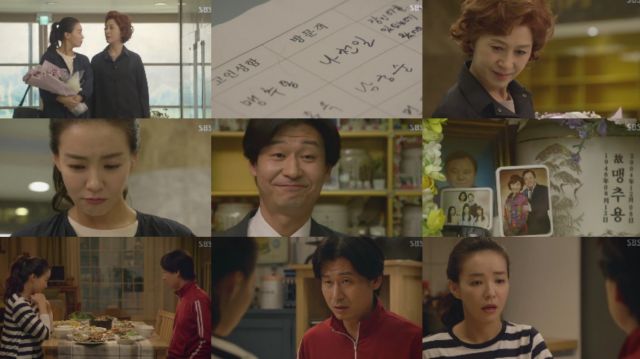 Cheon-il is a good guy. One of the big riddles of "Strong Family" is that most of the time, Cheon-il has no idea how or why he is being a good guy. Sometimes the expectation game is not his fault- as is seen with the opening conflict, sometimes the more obviously beloved behavior of other people is what makes Ra-yeon start to overthink things. Elsewhere, Cheon-il's determination to see the worst of life is his biggest weakness. Poor Cheon-il. He just doesn't know how to read a room.

Which does segue into the conflict of episode twenty pretty well, as Cheon-il comes across secret information and quickly proceeds to use it in a stupid way. What Cheon-il often fails to understand about himself, and the way people see him, is that they genuinely like Cheon-il for who he is. It's not that Cheon-il makes a special effort to do special things. It's all the small things Cheon-il does, just as basic obligations, that best show off who he is as a husband and boss.

I'm not mentioning father mostly because Cheon-il does do not do much dad stuff at the moments. Ik-hee in general is the most underutilized character of "Strong Family". We've been getting less of Ik-hee's school problems and more just using her as a sort of neutral observer in the Cheon-il/Ra-yeon relationship dynamic. That's certainly a very accurate way to treat the teenage daughter of any middle-aged couple, although it's a tad less than fully dynamic.

It still seems weird, though, that subplots about comparatively more minor characters get more exposition than anything Ik-hee is doing. And I mention this as someone who genuinely likes these subplots. I like Miss Jo, and the frank discussion wherein the woman explains how it is that she has so many daughters. Her scenes in the park are also pretty good, centered as they are squarely between silly classic romantic/melodramatic tropes and proper parody therein.

Storylines at Cheon-il's job tend to make less of an impression if only because of how slow moving these plots are. I do find myself increasingly liking Seok-moon as the soft-spoken boss whose input on any issue is incredibly neutral- almost perfectly designed to prevent him from accidentally offending anyone. It also lets Eom Hyo-seb give these great looks which make it clear he knows exactly what is going on and is merely being smart enough not to advertise the fact.