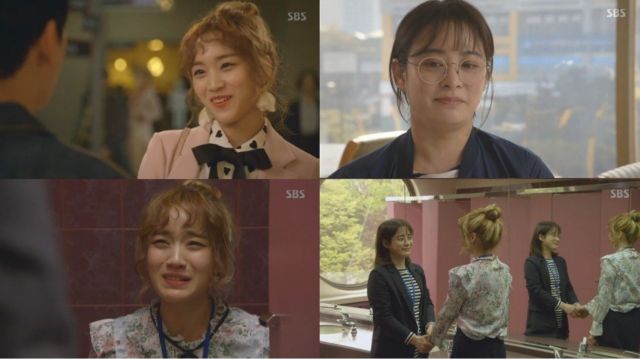 Cheon-il has just about completely disappeared from his formerly prominent position as main character. Yes, the center of the twenty-first episode does revolve around a questionable decision on his part. Overall, though, Cheon-il doesn't even really get any particularly noteworthy scenes. The main standout involves his own boss Seok-moon panicking over the prospect of spending a disproportionate amount of time waiting in sheer boredom.

Funnily enough, such a scene would work about as well with Cheon-il and Ra-yeon, so the only conclusion I can draw from this is that the production team is making a conscious effort to margainalize the alleged main characters in favor of increasingly tangential ones related to the side action. I have no particular objection to this, having noted with some frequency how Jeong-min is adorable as is any prospect of men fighting over her. I am a bit more disappointed that with an increase in importance, Jeong-min does not seem to be making snarky comments quite so often.

The twenty-second episode fully dives into the story of a very different and largely unseen character, Ra-yeon's elder sister Jeong-sin (played by Jun Young-mi), who, as if in response to all those romantic subplots from the twenty-first episode, decides that she needs a beau too. The problem is, all the men still available at her age are terrible. They're either explicitly rude, explicitly not interested or explicitly...have a weird hobby.

I definitely thought Jeong-sin's rejection of that guy was odd. I mean yeah, it's not an ideal hobby, but he doesn't smoke, drink, hang around with loose women, or acts like a spendthrift. If we're being technical, that hobby is less directly bad as it is bad because it tends to bring a person into close contact with those much worse personal habits. Of course, what do I know. On Wall Street people make a living doing what that guy was, with all the same implied vices, but those guys are a catch because I don't know they wear suits or something.

My rosy interpretation of his personal character notwithstanding, though, that particular joke does lead to a useful overall point. It is fine to not be part of a couple, provided that you are still happy with what you have. In that case, it's not being picky to want to value all the gifts you already have over the unknown of a possible lousy partner.If Jeong-sin doesn't want to gamble, hey, who can blame her?