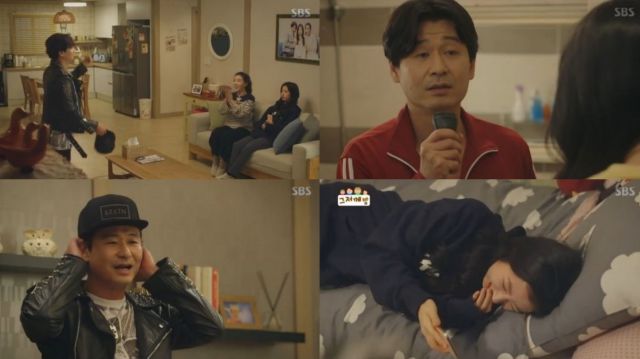 The direction in "Strong Family" is fairly unusual for a situation comedy. Observe how the camerawork is always in close quarters. We're always getting a clear look a the expressions of the various characters, yet never a clear overall glance of the rooms that they're in. The lack of emphasis on set design is odd considering the production team keeps reminding us that there's a fourth wall- by having characters talk directly at us.

"Strong Family" is getting to be what I would describe as too clever for its own good. There's nothing really all that funny about being self-referential anymore. At this point it's old hat, and far less unusual than straight sincerity. When in the third episode Cheol-il starts getting obsessed with all the rap music that the kids are into these days, the concept is funny enough on its own that elucidation doesn't really help. Simple jokes deserve simple delivery, because they become less impressive the more we think about them.

It's an odd situation for a drama to be in when greater ambition actually makes it less interesting, but that's where we are. While the third episode had a few laughs with good visual gags and funny facial expressions, I'm hard-pressed to think of any clear jokes at all in the fourth episode, which was mostly just discussion of family life and changes in a sort of wistful tone. Watching that is kind of like drinking soda mixed with water. It just does both tastes wrong.

On a similar note "Strong Family" appears to be having trouble deciding whether or not it wants to do any long-term plots. To date, only the love triangle between Ik-hee, Yoon, and Ik-hee's best friend Min-seo (played by Kang Eun-ah) has any sort of potential in that department. Curiously enough that plot point also has the least actual development, limited as it is mostly to Cheol-il and Ra-yeon trying, and failing, to pay attention to their teenage daughter's life outside of the home.

Which is funny! Even to people who don't have teenage kids, because most can remember what it was like being a teenager and how just on general principle evading adults was a fairly important past-time. "Strong Family" is very hit and miss. Sometimes the tone works, and sometimes it falls flat. At minimum the drama isn't explicitly bad or difficult to watch, I just hope it finds a better rhythm soon.