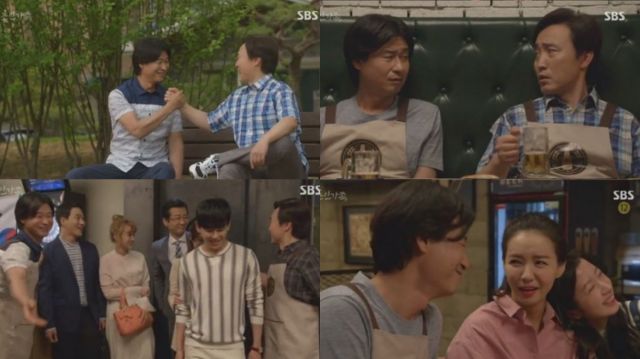 The final two episodes of "Strong Family" are surprisingly anticlimactic. This is appropriate, considering the only problems the titular family has ever dealt with are fairly small in scale, and thus necessitate similarly small scale solutions. The closest we get to a real setpiece is the bit where Choon-seop is trapped in the wardrobe. And in that case, the unnecessary drama is entirely what everyone realizes that they should be trying to avoid.

Because look at it this way. Miss Jo and Choon-seop are old. They have no reason to delay doing anything. Likewise, this is what Cheon-il and Ra-yeon figure out when trying to deal with Cheon-il's resigning from his job. They have to solve the problem of family finances right now. There's no time to wait for a long-winded plan to come to fruition, so that's exactly what they do. Even Seok-moon gets in on the action, because he's lacking in options too.

Other subplots remain unresolved precisely because there's no reason anyone should have to finish them quickly. Ik-hee is simply enjoying the time spent with her new beau. A brief meeting with her old beau is an opportunity for reflection and maturity, but that's about it. Note how Ik-hee's best friend has recently come up with a completely new plot of her own that's literally on course for a five year plan, so patience is pretty key.

That sentiment is the best overall way to watch "Strong Family"- late night timeslot notwithstanding, this drama is and always has been a pretty standard situation comedy. Its main strength has come from the genuinely sympathetic nature of the characters, and how they're dealing with fairly relatable problems. Even as the drama ends, those problems still exist. They will be solved in a timely manner, and new problems will also appear in a timely manner. That's life.

And life should be best enjoyed with friends. By reenforcing their current circle of friends, be they relatives, neighbors, or former co-workers, Cheon-il and Ra-yeon are able to put on a strong face and look on to ongoing troubles with a fairly optimistic countenance. It's all very reassuring. Still, as fairly generic exposition of modern South Korean culture, the comfort "Strong Family" can offer is pretty limiting. It's not the kind of subject matter that's going to set the world on fire in the style of Korean Wave- this drama is just about basic reflection.