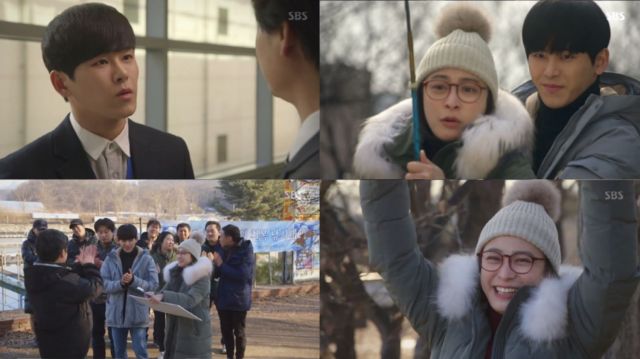 I've been coming to accept that "Strong Family" is rather hopelessly mundane. It's just a story about an idiot dad who's always trying to desperately to be cool and failing, in various degrees. But it's because Cheon-il is always making that effort that he's an easy guy to root for. It's also still reasonably amusing how Cheon-il does occassionally manage to solve problems by accident, or says stuff so stupid that it wraps all the way around to being funny again.

And just as often it backfires terribly. "Strong Family" is a bit of an odd drama in that it is so unavoidably normal. Consider how the seventh episode centers almost entirely around money, as the three main characters struggle over questions of measuring financial security versus happiness. It is entirely easy to guess where adults and their teenage daughter come out on this side of the equation, and the ultimate resolution as well is just more of the usual.

The eighth episode is rather more distinctive, in that it features Cheon-il trying to show off to people he wants to impress. But we're still looking at the same general trend of the drama being a little too relatable. Accidental expressions of ignorance, bizarre claims that are not technically lies, and meaningless heroic sacrifices are all...things people do every day when trying to impress each other. That a flying fish is involved is not, in and of itself, that amazing.

In terms of characterization Jeong-min and Gwi-nam (played by Lee Ho-won) are the more interesting characters simply by feeling more distinctive. It's kind of amazing, isn't it, that in this day and age we still have so few good characters who are just grumpy middle-aged women in office environments? Even if that whole subplot is probably technically a romance I also like how it is rather low-key. Just watching them talk to each other is satisfying enough.

It's not that I dislike "Strong Family" so much as it feels rather over-dominated by Cheon-il lately. Next week's preview, which promises some more focus on the quirks and motivations of Ra-yeon and Ik-hee, put me in a more optimistic mood. Because really, the male perspective of everyday life is just a tad overrepresented. With a truly extraordinary ordinary portrayal, "Strong Family" would do better to catch a wider spectrum of the human experience.