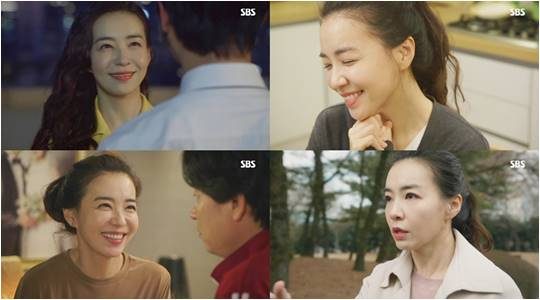 One factor of "Strong Family" that I rather like is the way it takes on people's imaginations. See, we are limited by personal experience. So when Ra-yeon runs across an old friend by chance, she starts thinking about bygone dreams from past years. Such dreams are inevitably painted in a fairly fantastical light. We're inclined to think of acting in terms of the polished final product we see on screen, not the rather monotonous and perfection focused process that goes into it.

While the situation comedy format prevents "Strong Family" from going too far in terms of depth of long-lasting consequences, that's actually a fairly decent summation of the catharsis as well. No matter what happens, or what failure inevitably comes to light, at the end of the day the family you have in the life you have chosen will still love and accept you. Same with your friends, and even your past friends. The benefits of a seemingly unspectacular life are by nature subtle.

The tenth episode has a more interactive take, because the ambiguity goes on between family interactions. Cheon-il just gets increasingly paranoid about his daughter having a boyfriend. And a lot of this is just ambiguity about his not really knowing what the female experience is like in this regard. Frustrated by his inability to simply ask what teenage girls should be doing, Cheon-il inevitably resorts to being a creepy awkward stalker dad.

Although more than the plot, what makes the tenth episode work better is that we get to see more of Jeong-min. Although maybe it's just Park Hee-von's expressions I really love. She really knows how to communicate a lot of information with just a single simple blank death stare. Jeong-min would be a great lead character in a tvN styled romantic comedy. Specifically the kind with relatively little romance, where the heroine is attractive just by being really cool.

Anyway, back to Cheon-il's obsession with his daughter's boyfriend, there is one useful frame of reference. Cheon-il used to be a boy who obsessively pursued a certain girl once upon a time, even if they weren't quite that young. That's why it's hard to hate Cheon-il's paternalism. However you look at it, a child is better off with parents who are interested in their well-being than ones who feign disinterest in the lives of their children. Even if the children are, understandably, less than fully appreciative of this.