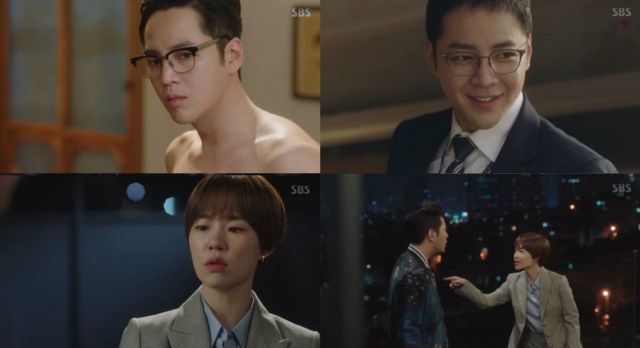 The first five minutes of episode seven are a recap of "Switch - Change The World" so far along with the full cliffhanger from last time, now with an explanation. I can't decide whether the production team is trying to cut costs or if they really are that self-indulgent about how clever the turnabout was. It was a decent turnabout. Do-chan may not be a real prosecutor but he's definitely observant. But personally I'm more concerned about the ongoing effort to murder Joon-soo.

It's odd how extremely impersonal "Switch - Change The World" feels when you'd think Joon-soo would be taking the assassination attempt a little more personally. Not that I can blame this on the actor. After all, Jang Keun-suk is great as Do-chan. It's just strange that Do-chan has a bigger grudge against Tae-woong than Joon-soo does, when Do-chan's animosity is the result of an as far as we know completely unrelated backstory.

But already I'm wondering what exactly Joon-soo adds to the operation aside from his handy ability to prove that he is not a fraud. Incidentally, I like that absurdist backdrop with the prosecutor's office. There's just something so surreal about people accepting with a smile the fact that one of their co-workers very sincerely tried and failed to out the other as a fraud. Do-chan apparently intends to hold off uncomfortable questions indefinitely by just making social circumstances feel awkward.

Not just Joon-soo, but I'm also kind of wondering what Ha-ra is contributing- in part because her role is so tied up with Joon-soo. In terms of independent motivation, the main distinctive Ha-ra fact I know is that her grumpy mom thinks that she needs a boyfriend. The comment about finding good men at the prosectuor's office was a good unintentional laugh, considering that South Korea's recent culture-wide inquiry into workplace sexual harassment was kicked off by a complaint from a woman prosecutor.

As irrelevant and silly as that storyline is, it somehow manages to be more engaging than the actual main storyline. I think part of the problem is there's just not that much surprise. We already knew how the drugs were being transported, so it's no big revelation when Do-chan just goes up and does the same thing Tae-woong did a few episodes back. "Switch - Change The World" needs better twists. What's the point of having a con artist as the main character if we're not constantly being surprised?