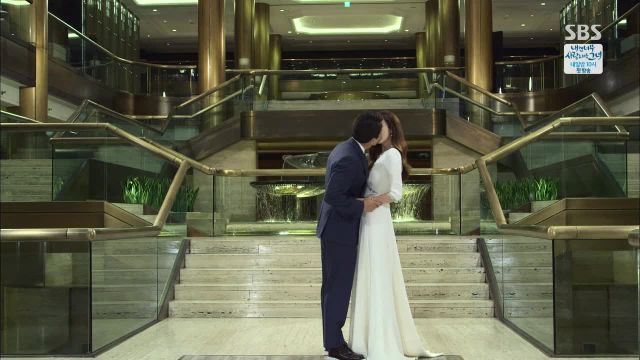 "Temptation" has come to a hopeful end without resolving a lot of questions. Some of those questions don't need resolution, but some of them have become loose ends. Most of the focus was on Seok-hoon and Se-young's relationship and how it weathers the storm of her cancer.

Se-young's cancer did give Hong-joo and Seok-hoon a chance to say goodbye at the silent behest of Se-young. Their relationship never had a real resolution, but in a situation such as theirs, resolution can be impossible. Individually, Hong-joo and Seok-hoon found resolution and reasons to live that grew from their broken marriage and the subsequent events. Hong-joo now knows how she wants to live and even advises her very miserable ex-husband Min-woo to buck up and fight his misery as she did. Seok-hoon has found a person who needs him. He is a natural caregiver and needs someone to look out for and to love.

Min-woo had a last minute turn around because of Hong-joo's advice. He is still arrogant, but will now fight Se-young in business the fair way. His fall far long and hard. He lost everyone around him. Although this is a great catalyst for change, it should've happened before the last episode. A lot of things should've happened before the last episode.

The unresolved issues that really needed to find some resolution had to do with the families of the main characters. The romance between Se-jin and Hong-gyu thrives, but there are still secrets there that have not been exposed and dealt with. Se-jin does not know that her sister's romantic rival is Hong-gyu's sister. That's a big issue that needs to be dealt with. Se-young's father hasn't spoken with her for ages and doesn't know about her illness. She was worried for him and loves him, but has no contact with him. It makes little sense. Her father only comes into the story to serve as a person to move along the exposition. Same with Min-woo's children. They only appeared to act as foils for Min-woo, Ji-seon, or Hong-joo. Their situation was a wonderful one for the writer to explore with a broken home and the pressures of money and half-siblings, but that was also left by the wayside.

Regarding Se-young's cancer, if "Temptation" really wanted to include cancer, it should've addressed the suffering of the patient and her loved ones more fully rather than try to cram the horror of realization and the uncertainty of the future all into one hour. It dealt with the doubt and denial as Se-young avoided surgery for several episodes, but the cancer issue felt rushed. I do like that there was no resolution, but that Se-young came to terms with her illness and decided to fight it anyway alongside Seok-hoon.. That is a beautiful open-end for them.

So much of "Temptation" was "drama for drama's sake" rather than purposeful. Only Hong-joo felt like a continuous character who bumbled through life and learned and grew. Even she became gauche to serve the plotline. The others changed, or stagnated, in fits and starts that led to high tension with little payoff. In terms of entertainment, the romance and cheating and tensions were quite fascinating. But logically, there was little satisfaction. The actors did excellent jobs with what they were given, especially Choi Ji-woo who wrang so much out of every second she was on screen. Lee Jung-jin gave Min-woo as much depth as he good given the shallowness with which the character was written.

"Temptation" has come and gone. It had its highs and lows, and ended on a note that gives us hope for the characters' future.