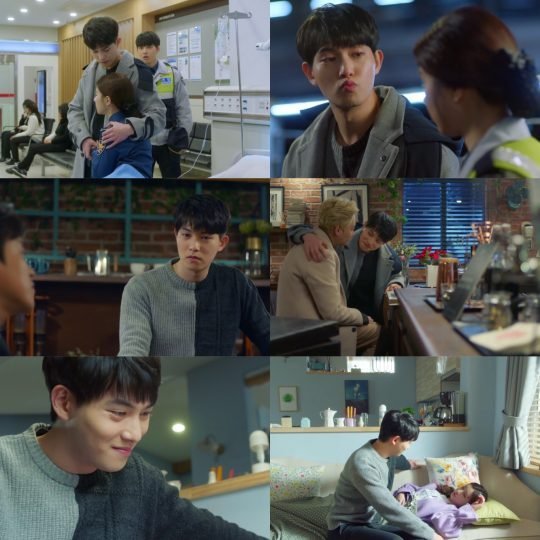 Right when I thought "That Man Oh Soo" was done with hospital scenes we end up right back there again. Thankfully the trip to the hospital is not a long one, although the main thing that happens there is a mildly amusing gag involving one character being confused by how Yoo-ri appears to have multiple identical boyfriends. He doesn't say anything about Oh Soo and Ji-won being identical. That's just what I was thinking during that scene.

Another memorable comedic sequence involves Soo-yeong, although not for the right reasons. In the first place, I just find it funny how Yoo-ri is shorter than her kid sister, and we've never seen them so clearly side-by-side like that before. But the climax to Soo-yeong's sudden appearance at her own home is completely bereft of proper comedic timing. The sequence ends way too soon, with nowhere near enough jokes about how Soo-yeong keeps accidentally foiling Oh Soo's attempt at a clean getaway.

That lack of conflict is what has really wrecked "That Man Oh Soo"'s effectiveness even as a generic romantic comedy. Oh Soo and Yoo-ri used to be charming because they were always picking weird, frivelous fights with each other or whatever other random people happened to be nearby, because of their prickly personalities. Their warming up to each other was a natural consequence of Oh Soo and Yoo-ri mutually realizing that the other always at least means well.

But instead of the story flowing naturally through this character interplay, instead Oh Soo acts like a completely different person, the villain is some guy with a weird neck tattoo, and also that magic tea which Yoo-ri impulsively drank has now sealed her doom somehow. I was wondering why exactly Oh Soo even made that tea in the first place. You'd think if it was so dangerous, he would have been alarmed to discover that it had disappeared without explanation.

I remain very disappointed in the severe lack of interest "That Man Oh Soo" has demonstrated in regards to its own worldbuilding. With these new revelations about the dangerous nature of the magic tea operation, I've been left wondering why the ancestral tea tree is so important in the first place. The only positive Oh Soo gets out of being the tree's ward is his ability to read people's expressions as colorful particles. This ability has never seemed all that helpful, considering it's easy enough to read people's expressions the normal way.