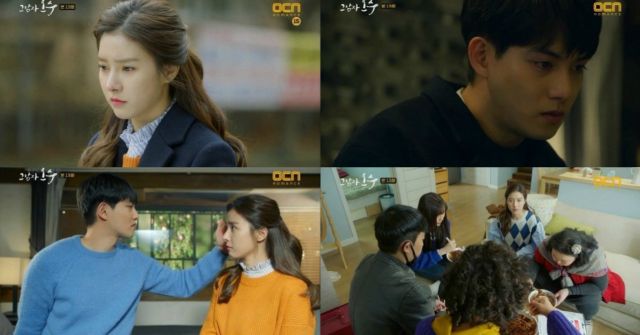 So the night stalker storyline appears to have been resolved almost entirely by accident. I can't decide whether this is a good thing or a bad thing. On one end this plot was undeveloped from the very beginning, so I'm glad it's out of the way. But on the other end, the remaining storylines aren't that much better. Eventually the issue with the murderous magic tea is explained...in the preview. I can't figure out why this basic worldbuilding has been held back for so long.

The Law of the Tree actually makes a lot of sense now that it's been spelled out. Since Oh Soo can use the magic tea to mess with people's emotions, it makes sense that there would be horrible consequences should Oh Soo try to use the magic tea for personal gain. This also provides some obvious avenues for loopholes. Oh Soo and Yoo-ri were not together romantically back when she drank the magic tea. They didn't even like each other.

Unfortunately Oh Soo instead comes up with the stupid overly dramatic solution to the problem, which is just to unilaterally end the relationship without even giving her so much as a cursory explanation. Worse, my irritation with Oh Soo's idiocy was not in the least assuaged by Jin-woo showing up and punching him. Really that just makes Jin-woo seem like a jerk for violently overreacting. It's not like he's had all that much presence in this drama after all.

Speaking of characters who lacked presence, I'd like to discuss Oh Soo's boss (?) Ji-seok (played by Choi Dae-chul), who makes a big show of buying an expensive watch. Then he goes off to stalk Che-ri (played by Yoo Il), who is planning to make a very extreme life decision in the near future and is apparently up front about this on first dates. These are their main distinctive character traits, which is surprising considering they've been hovering around in the background for the entire drama.

I know "That Man Oh Soo" is a generally silly light romantic comedy about magic tea. But everything about this production is so by the motions, and so lacking in ambition, that I can't even try to enjoy it as a guilty pleasure. There are interesting story elements here that could make "That Man Oh Soo" distinctive which are simply ignored in favor of well-worn clichés. What's the sense of playing the story safe when there's no spark worth protecting?