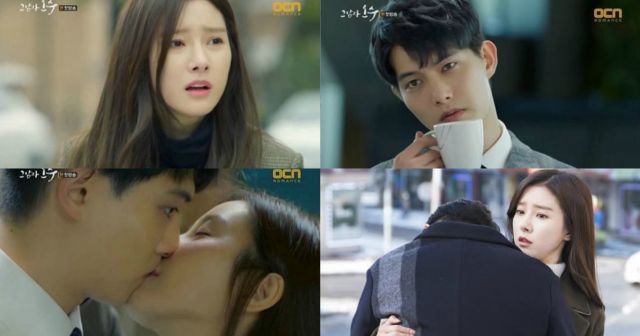 I like how Yoo-ri is short. I mean, women are short in general, but it's rare to see a drama actually take advantage of this thematically. Since Yoo-ri broke her heels as part of that horrible, horrible day, Yoo-ri has to be aggressive with Oh Soo to get what she wants. it's an accurate metaphor for Yoo-ri's character as a whole. The first we see saw of her Yoo-ri was going after the weights really are and now we know why she compensates so much. It turns out Yoo-ri is a police officer.

Why we needed to wait until the end of the second episode to learn what Yoo-ri's day job is, well, that's another mystery entirely. Note that we still haven't actually gotten to the premise. Yes, the tea Yoo-ri impulsively drank and the kiss she impulsively steals from Oh Soo are relevant. That all has something to do with the magic tree where Oh Soo's family gets their special tea-related powers from, it's just not clear what yet.

Instead we end up spending a lot of time with Yoo-ri at the hospital. There's a really good subtle gag here about how Yoo-ri spend quite a long time with a visibly embarrassing nosebleed, and apparently does not notice this until really, really late. The funny part is that until then I just assumed Yoo-ri was unnaturally self-confident. Indeed, confidence is such an important part of Yoo-ri's character that's what everyone else assumes too.

As the female protagonist of a romantic comedy Yoo-ri shows a lot of agency. Usually the best you can hope for is that the male and female leads will show equal agency. Bad screenwriters sometimes assume that having the woman pursue the man counts as agency- it doesn't, because in those cases the man is almost always the one who gets to make decisions about whether the relationship will progress. Yoo-ri and Oh Soo, by contrast, mostly try to avoid each other. Unsuccessfully, of course.

There's definite light humor in that, which somewhat detracts from the way the script keeps forcing Yoo-ri and Oh Soo to cross paths. There's a fine line between contrivance and parallelism. But then, the most distinctive example, where we see Yoo-ri catching Oh Soo when previously he had always been the one to catch her, definitely falls into the latter. So for the moment I'm mostly sympathetic to the unfolding storyline.