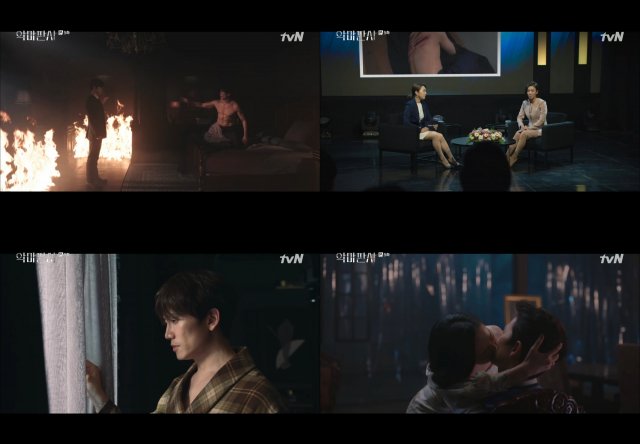 The opening subtitles apologize for the apparently tasteless extended burning cathedral scene that closed out the fourth episode. But by the end of the fifth episode "The Devil Judge" has managed yet another blunder in the boundary pushing department, with a scene that appears to imply that prison rape is a form of justice. Also, there's the implication that there's no such thing as rehabilitation for sex criminals.

It seems like "The Devil Judge" should be featuring instances of Yo-han being needlessly cruel to less powerful defendants. It's been implied that he's done so in the script. So it's a bit odd that in a flashback here we actually see Yo-han doing the exact opposite, of being merciful to a poor child abuser due to the mitigating defense of alcoholism. And in terms of the show-within-a-show, we're Yo-han is now three for three in terms of punishing clearly awful defendants who we're obviously not supposed to see sympathetically.

The preceding part of the episode is mostly forgettable. Kyung-hee struggles with the issue of cruely to her son contrasted with her professional role as the attorney general. What exactly she's doing isn't super clear. Other characters act as if Kyung-hee is engaging in smart politicking by making her son's flogging seem like barbarism in and of itself although really, that Kyung-hee's son is being treated with cruelty is the entire point.

"The Devil Judge" is faltering by allowing Yo-han to be a genuinely heroic figure who extreme methods are questionable without engaging the underlying motivation. We seem genuinely close to public opinion turning against Yo-han but I noted with some surprise that we have the same lopsided app vote as usual. This is especially odd given that, unlike the previous two votes, the choice is between a cruel punishment and a conventional punishment, not a cruel punishment and no punishment at all.

These overly exotic legal arguments are also clashing with the more banally evil tone elsewhere. Observe how there's an entire setpiece of the President and his wife attempting to use an online stream to prove that they're just normal relatable people. The jarring leap from Trumpian to Bidenesque style political pandering is oddly appropriate, as South Korean society itself in "The Devil Judge" seems to be realigning over the internal fandom of the show-with-in-a-show. It's a pity "The Devil Judge" seems more interested in the personal rather than the political though.