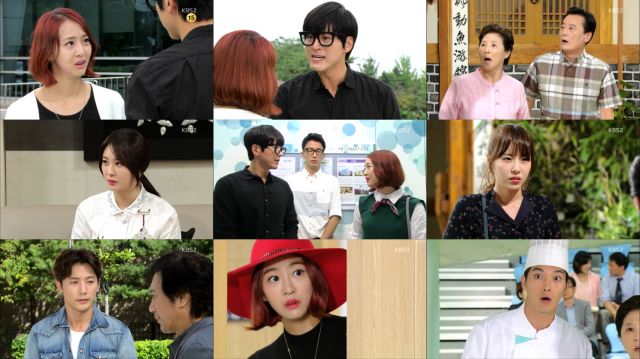 I'm frankly not grasping the logic of In-yeong and Myeong-seok suddenly acting like they're from completely incompatible worlds like this is a bad thing. To be entirely honest In-yeong has never seemed like an especially competent idol in the first place, and the way the story is suddenly acting like she's an obvious natural at the job is a bit off-putting. A celebrity can give some juice to their career by appearing on a variety show but that in itself isn't much of a gamechanger. Especially since "The Eccentric Daughter-in-Law" never showed us that much of the variety show in the first place.

Still, credit given where credit is due- Kim Dasom and Ryu Soo-young have very good chemistry. They even manage to look very convincingly hurt at the idea of a more-or-less indefinite separation, convincing themselves it's for the greater good. At least part of this is enabled by contrived timing undercutting confessions but even so, as basic pulp "The Eccentric Daughter-in-Law" manages to get the rudimentary aspects of the family romance drama down pretty decently.

Alas, there is more to the story here than just In-yeong and Myeong-seok- and these plot points remain unsettling as usual. Se-mi's storyline resolves, somewhat uncomfortably, with her happily just returning to the kitchen. I'm not making any value judgments on the obviously conservative thrust of this storyline but...all right I guess that's not a question that can really be avoided. That whole arc would have gone down a lot better if we'd been given reason to believe the academy that hired Se-mi was disreputable somehow.

Beyond that, the rest of the story drives up to this big encounter at a cooking competition. Which is sadly another case of an interesing background plot element that was not sufficiently and convincingly explored. This entire time I've wanted more discussion of how exactly the cookery works and what their goals are- but all that's really coming out of that is a crisis that In-yeong will presumably be able to help resolve somehow.

I'm comfortable enough with "The Eccentric Daughter-in-Law"  that these plot issues don't bother me that much anymore- or maybe it's just that I've realized most of the drama's flaws can't reasonably solved with only one episode to go. It's a little irritating that we appear to be sailing toward a fairly standard no-frills happy ending when this drama has been such a hotbed of emotionally abusive behavior. Ha-ji's kind of a jerk, but at least the other characters call her out on it.