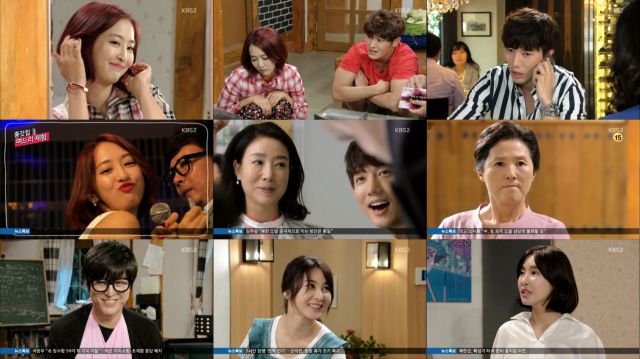 In-yeong is surprised to see Myeong-seok stick up for her with the producer, considering that up until this point In-yeong and Myeong-seok haven't really gotten along that well. And so In-yeong, as well as the other characters, make a seemingly logical deduction. Obviously Myeong-seok has fallen in love with In-yeong. Why is this the obvious explanation? Well, because it's the most storylike, and thus the best possible ratings hook. Naturally it does not occur to anyone to simply ask Myeong-seok his reasons, because that would completely ruin the fantasy world In-yeong and friends have concocted.

"The Eccentric Daughter-in-Law" is at its best when the drama just straight up mocks assumptions created by the illusion of television. Take, for example, In-yeong's coy attitude about appearing in public with a celebrity face. In-yeong fails to appreciate that in the first place she's not that famous. But more importantly, just because someone has seen In-yeong on TV, doesn't mean they can recognize her in person. People look different on television and off.

Even though In-yeong is the perspective character she's always the one who seems like the weird person. Whenever In-yeong tries to explain how "reality" works to Myeong-seok, he simply points out that her explanation makes no sense. Myeong-seok teaches math. He barely even cares about the reality show angle, but is legitimately totally annoyed when In-yeong starts acting like a television persona, especially in front of friends. By contrast, moments where In-yeong offers a helpful unexpected deduction are a highlight, as they hint that In-yeong is smarter than she realizes.

The main weakness of the drama is the other mother-in-law, Mi-hee. I don't like Mi-hee or find her to be particularly interesting. Most of the time I struggle trying to remember what exactly Mi-hee has to do with the rest of the story at all- this confusion is generally only relieved when a character from the cookery shows up in one of Mi-hee's scenes. By and large, the drama suffers from this subplot. It mainly just makes me want to see more of Choon-ja, because there's a mother-in-law that's a straight shooter.

Something I rather like about "The Eccentric Daughter-in-Law" is that it's a relatively light, low-pressure production. There are plenty of secrets floating around, but they're secrets less because an active effort is being made at secrecy and more because the characters aren't quite smart enough to just talk about their problems in normal-person terms. In a more high stakes story this attitude would be frustrating- but in "The Eccentric Daughter-in-Law" it really adds to the relatability of the characters.