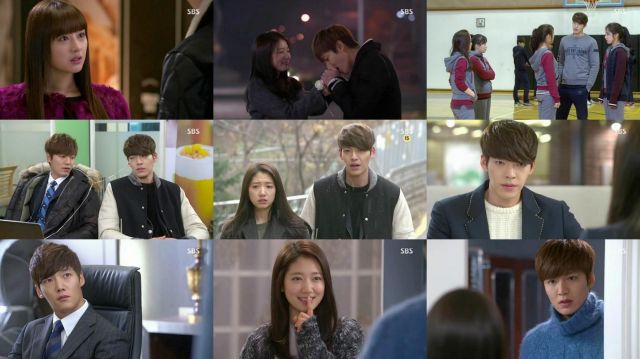 I really don't like Kim Woo-bin's new haircut. The one he had before was really slick and sharp- it showed off the rough, smart edges of Yeong-Do, and the way it played off of his eyebrows was just great. But this new haircut is almost exactly the same as Lee Min-ho's, and while that kind of hair works for members of the Kim family, it lacks the sneaky smugness that the character of Yeong-Do really needs. It's also slightly confusing having so many unrelated cast members with similarproblems. In a me-looking hair.

Anyway, aside from the hair, there's some still some good stuff here. The episode starts out the same place we left off at the party, and we almost immediately delve into a hilarious bit of tit-for-tat. This is why I like the so-called villains of this show so much- they've just got this great penchant for flair. But more importantly, they know that they're overreacting to situations, which is a base level of honesty really missing from the Kim Tan / Eun-Sang pairing.

For what it's worth, we do start seeing more actual conflict this time, as the consequences for Kim Tan's action continue to escalate and it's clear that his apparent inability to take direct responsibility is causing serious problems. In a memorable scene, we see his mom bail him out of one spot of trouble. She isn't exactly the most reliable ally and I'm not terribly confident in her ability to be of much use in the future here. Kim Tan does get a good one in with the hired goons, but given that this scheme required Yeong-Do's help, well, again, Kim Tan's just not very good at this independent stuff.

The main problem with this drama for me is that I've just run out of patience with the Kim Tan / Eun-Sang plotline, and while there's a lot of stuff going on this episode, none of it can escape the fact that these two form the emotional center of the storyline. Nearly everything that any other character does at this point is some sort of response to their relationship. The stakes are really a bit absurd, given that this is literally a high school romance.

Still, whatever the motivation, I'm all on board for anything that brings more corporate schemes, blackmailing, and backstabbing into this storyline. There's an actual, palpable energy to these moments that's genuinely a lot of fun. It really comes out how much so many of these characaters genuinely dislike each other, and I like the sense of alliances that could fracture at a moment's notice provided some other character can provide a convincing argument to change sides. That argument just isn't, and likely never will be, that Kim Tan and Eun-Sang should to be together.

"The Heirs" is directed by Kang Sin-hyo and written by Kim Eun-sook and features Lee Min-ho, Park Shin-hye, Kim Woo-bin and Krystal.