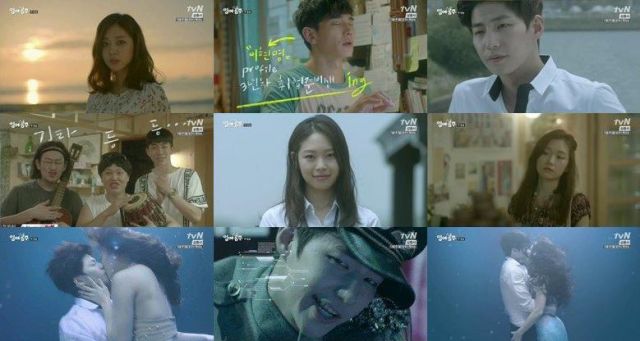 The Little Mermaid fairytale was not at all romantic, Disney's protestations notwithstanding. It's a pretty bleak story about how an excessively romantic attitude regarding love is an unrewarding process that will probably backfire horribly and either result in you dying or transformed into a spirit. Yeah, it's a pretty weird story. And "The Idle Mermaid" quickly establishes itself in a similar vein by making it clear right away that our main character is not a good person (or mermaid, whatever), but rather a childish, immature teenage girl.

Ha-ni (played by Jo Bo-ah) has almost no positive character traits that I can tell. She is, for all intents and purposes, an annoying younger sister utterly obsessed with her cell phone and stubbornly insisting that everyone help her with whatever terrible idea she's come up with at the moment. Although in all fairness it's not like the mermaid kingdom in general is in very good shape. The supernatural creatures in "The Idle Mermaid" have not benefited much from interacting with human culture.

Nor, for that matter, have the humans, who by and large aren't much better than Ha-ni. Si-kyeong (played by Song Jae-rim) is an arrogant celebrity chef. There's not that much more to him, really. The guy's first reaction upon meeting Ha-ni is about as weird and creepy as hers is. Jin-ah (played by Park Ji-soo) seems like she might have more depth, but that's quickly shattered first when we see the woman's personal life situation, as well as her similarly skeevy scheme for trying to get out of it.

So is anybody in this drama likable? That honor ends up going to Hyeon-myeong (played by On Joo-wan), who is unemployed and constantly dealing with the social strain and pressure relating to that, yet who makes an incredible effort to keep smiling all the time. Of course, in the context of everything else that happens this episode, Hyeon-myeong comes off as terribly naive, although it's at least a good naivity, about how the system works and how nice it is that he has fulfilling personal relationships. Contrast the other characters, whose dreams mostly involve staring at Si-kyeong's butt.

Tonally "The Idle Mermaid" is in a weird place. It's simultaneously a light-hearted romantic comedy, yet almost all the humor is built off of the fact that these characters are making disastrous decisions that will inevitably backfire horribly. It's completely bizarre- yet also surprisingly refreshing and novel for a concept that's almost two hundred years old. I'm very curious what the next episode has in store now that the premise and characters have been clearly set up.