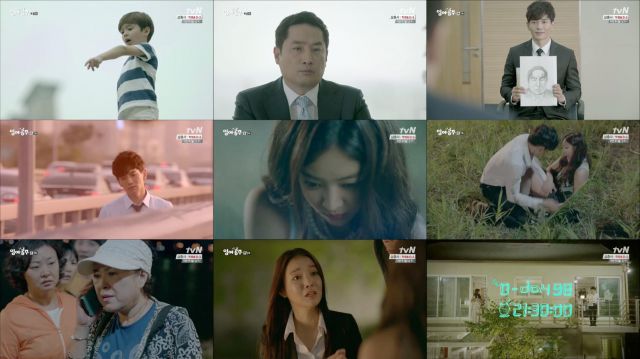 Apparently we're still stuck setting up the premise, although in all fairness this is mostly Ha-ni's fault. Ma-nyeo (played by Ahn Kil-kang) tried to warn her, and explain how exactly the magic worked, but Ha-ni just had to be a dumb impulsive teenager. I do like the Ma-nyeo character here- the sea witch gets a bad wrap in most adaptations. In the original story she just provides a service. "The Idle Mermaid" does an excellent job recognizing the fact that even if Ma-nyeon facilitated Ha-ni's bad decision making, the situation is clearly her fault, not his.

This makes for a stark contrast to Hyeon-myeong, who is just having the worst possible day and it's all too easy to feel sorry for the guy. He does his best, and is rewarded with mockery because his passion in life isn't easily marketable. The criticism of modern employment culture here is pretty sharp, as is the commentary on suicide. No, Hyeon-myeong doesn't resort to anything that drastic, mostly because he knows no one will save him. The aphorism on the bridge is especially dark, because while it might sound decent to a non-depressed person, these words are meaningless to Hyeon-myeong.

Successful people in particular are also taken to task here at the club. Jin-ah, far from being understanding and sympathetic, continues to basically just be an all around bad person who practically has to be bullied into even attempting an act of compassion. Her negative attitude toward both Ha-ni and Ma-nyeo is particularly troublesome given her knowledge of the circumstances. When Ha-ni and Ma-nyeon first meet, there are two mutually exclusive interpretations of what happened, and Jin-ah chooses to believe both of them depending on which person she wants to emotionally humiliate at the moment.

The characterization is very strong, and even the tone works surprisingly well. The transition from Ha-ni's teenage silliness to Hyeong-myeong's terrible day is almost seamless. It helps to establish that there's Ha-ni's fantasy about what the human world is like, and what it actually is, so that when Ha-ni finally realizes what she's gotten herself into, there's really no surprise.

The main weak spot of the drama right now is in the comedy. It's too heavily loaded with referential humor, and not enough on context. If I wasn't familiar with the works of media being spoofed here, I'd find most of these jokes to be bizarrely confusing. As it stands, they're just fairly dull. Still, "The Idle Mermaid" has enough going for it in terms of strong points that I don't mind this too much.