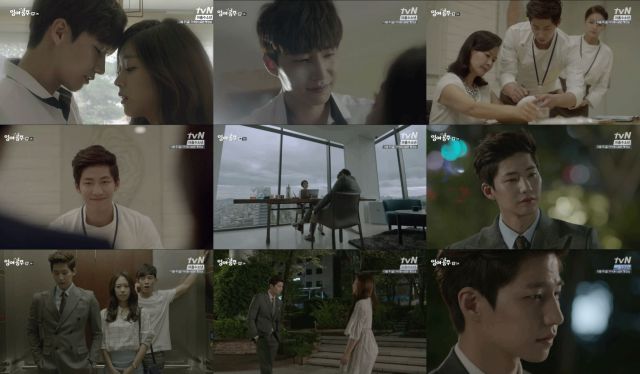 Apparently the drama is still setting up the premise. Which isn't as strange as it sounds really- it's just that most adaptations of the original story just assume that we all know how everything works. It's actually very much to the credit of "The Idle Mermaid" that the question is posed- what exactly is true love anyway? Yeah we're supposed to know it when we see it, sure. That's really not much help to anyone who has no idea what the experience is like.

The question is resolved mostly convincingly by the end of the episode, mainly through the help of obvious personality changes. People act completely differently with the person they love than they will with anyone else. This is mostly self evident, not that clever, and doesn't even prove anything. "It's Okay, That's Love" made the exact same point and didn't manage to particularly impress me.

What's different here is that there's a genuine sort of casual affection on display. Even with Hyeon-myeong and Jin-ah, who are going through a break-up, there's an obvious sense of lingering feeling. As terribly heartless and unsympathetic as Jin-ah is, even she's bothered by the realization that yes, this emotional connection has been ruptured. Bear in mind it still hasn't sunk into her yet that Si-kyeong probably doesn't have much going for him outside of his really hot butt.

The comedy still isn't outstanding, but there's enough surprises here to keep the proceedings lively and interesting. I liked the mystery of what's causing all those loud noises upstairs. No it's not what you're thinking. Don't feel dirty or anything. That was my first thought too, as well as Ha-ni's. It's all a matter of thought process. Life is typically weirder than anything our imaginations can come up with, and I really like how "The Idle Mermaid" is able to move effectively along this vein.

Probably the most effective part of this set-up is that the drama quite literally demonstrates about half a dozen possible pairings, all of which are equally plausible at this point in the storyline. The characters are all so thinly drawn that even the comic relief guys are pretty plausible pairings for any given female character. However, it needs to be noted that this is at least marginally due to the fact that most of the cast isn't well-developed to begin with. We have some slight hints as to the true characterization of Jin-ah and Si-kyeong, but nothing definite yet. Hopefully they're able to live up to expectations.