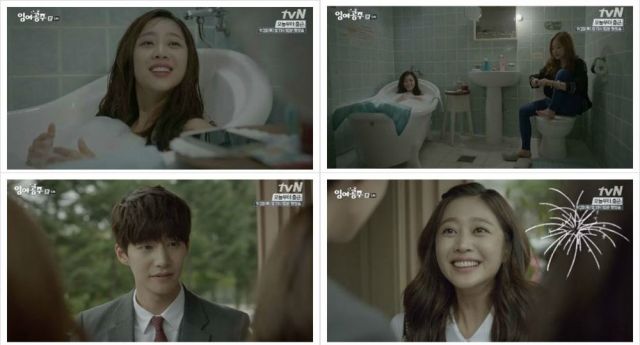 Si-kyeong's complete lack of clear characterization has at this point become a running gag. Pay attention to how he responds to questions or statements this episode. Pretty much every time he regards new information quizzically, like someone has just asked him to solve a mystery. It's genuinely really difficult to tell how much of the ongoing situation the guy understands, even though he's obviously smart enough to be a famous chef.

In terms of Ha-ni's quest, this take on immediate interesting proportions because we get a clear answer to as how much he knows about her, as well as what Si-kyeong is expecting in the future. It's honestly a little fascinating how "The Idle Mermaid" has consistently framed their relationship in shallow terms. The implication is clearly that Ha-ni will have to find true love from somebody else, and yet there's actually not that many obstacles from Si-kyeong's direction aside from Jin-ah's interference.

That's another character who appears to fit into a clear nasty archetype and yet her personality too is rather ambiguously portrayed. Obviously Jin-ah's attraction to Si-kyeong is just as petty minded as Ha-ni's is, even if she's better able to hide it under a veil of respectability. This episode makes such definite progress under the romantic and career portions of these characters' lives that it's easy to see the flaws for what they are.

Whether anyone will overcome their flaws remains unclear. The harebrained business scheme of the housemates comes under full focus here, and they actually manage to come up with a pretty decent plan. The obstacle ends up being a stubborn unwillingness to accept each other, flaws in full, resulting in a fight that derails everything and could have been easily avoided if everyone had just been willing to accept a bit more flexibility from each other. Note how, by a wide margin, characters accomplish the most here when they're just honest, even if technically that's what they're supposed to be trying to avoid.

And just to be clear, the fundamentals of the comedy here are also very strong. Just the background details are worth noticing. The costumes, for example, are exactly the right kind of inconsistency you would expect from this kind of business operation because of course normal people don't  pay attention to who owes what rights to which character. I also liked the foreigners- who speak passable, but obviously substandard Korean. I hope that's not what I sound like...