[HanCinema's Drama Review] "The Man In My House" Episode 16 Final 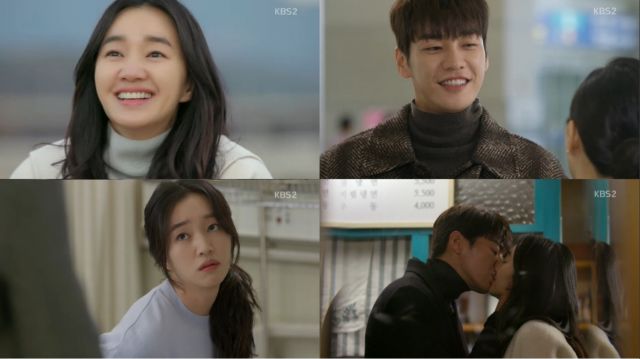 I like the music in "The Man In My House". Well, the happy stuff anyway. When Na-ri and Nan-gil are being cute with each other, the sound design is a lot of what helps prevent the scenes from feeling actively confrontational, which really, they are a lot of the time. Compared to when they flirt and when they really fight, the main difference in tone with the Na-ri/Nan-gil relationship is decided by the musical cues. My preference has always been for the comedic ones, because the dramatic scenes just drag.

Fortunately the final episode is more focused on the former than the latter, what with this being a happy ending for which the dramatic cues are no longer necessary. Deok-bong finally decides that instead of just complaining about his father's stupid idea, he's going to do something about it. The resolution is anticlimactic to say the least, and the resulting happy family scenes a tad unearned, but the point is, all the characters are generally happy together.

Because that's what the journey has been for all the cast- less about dealing with the main conflict and more with just being comfortable doing what they want for fun. Na-ri has stopped feeling guilty about not being there for her mom. Nan-gil has stopped with the martyr complex that comes with protecting the land. Yeo-joo...stops stealing boyfriends I guess? Deok-bong never really did much in the first place except be a lawyer, so I guess he's still a lawyer.

It is rather telling that the big legal scene here, identical to the last big legal scene right down to the conclusion, is different solely because Na-ri and Nan-gil have stopped getting so hung up about symbolic problems. These are so, so much better when they're not sulking. With no gangsters and conspiracies in their midst, even the more annoying antagonistic characters are easily integrated into their daily lives. And hence, a happy ending where the only arguyments of note hinge upon proper dumpling construction technique.

"The Man In My House" did, in the end, manage to end satisfactorily. I was relieved for this much, because it confirms that the light humor which characterized early episodes was no illusion. Na-ri and Nan-gil are just as cute now as they were back then. It's easy to forget that when so much of the latter drama in "The Man In My House" revolved around stubborn extended reactions to slow-moving plots.

"[HanCinema's Drama Review] "The Man In My House" Episode 16 Final"
by HanCinema is licensed under a Creative Commons Attribution-Share Alike 3.0 Unported License.