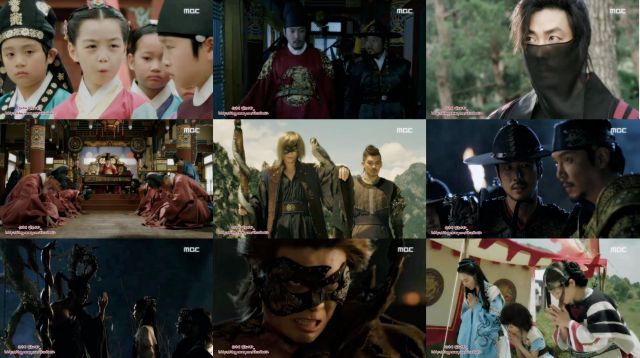 The episode starts out on the positive end, giving a basic explanation of the mystical magical universe our characters inhabit. Then we move on to the most adorable party- a bunch of children wearing small little kid hanboks and playing around just having such a wonderful time. They're so cute! I know it's not going to last since next episode they'll turn into adults. I just really wish someone would make an actual drama about kids in the Joseon era playing games wearing those adorable little costumes.

...All right, moving on. Everything is quickly wrecked by either the eclipse, the wizard, or the ghosts. It's a little difficult to tell the difference because this drama has a lot of different factions whose motivations aren't really clearly explained but at various times they all seem to be working together. Their coordination is pretty lousy, though, since they make the mistake of antagonizing both the king's army and the good spirit tribe at the same time.

So, we've got the wizard, the ghosts, the king's army, the good spirit tribe, and the bad spirit tribe, which I think is being led by the wizard but I'm not really sure. There's so much to keep track of here I'm surprised I was even able to figure out what was going on, because almost no explanation is offered for who any of these factions are and what they want. They're just token good guys, bad guys, and forces of nature.

What little actual plot we get is similarly not terribly inspiring. It's reminiscent of a video game. Hae-jong (played by Choi Won-young) always happens to be in the right place at the right time to participate in everything that's going on, even though he's the king and they usually take a background role. To solve one problem, he takes a quest to beat up a bunch of bad guys somewhere else and luckily there's a legendary weapon only royalty can use and also a romance has gotten dragged into all of this somehow.

It's hard to imagine that it took three people to write this. Still, the problems with the script would be managable if it led to some good action but the special effects here are similarly not particularly inspiring. And the drama only comes off all the worse because all the fights are literally decided by magic. Characters just whip out these supernatural abilities and weapons at random to move the action forward and, you know, I get that it's magic but we really need at least some basic rules for there to be any kind of dramatic tension here. Hopefully once the actual main characters grow up this drama will slow down a bit and do a better job explaining itself.