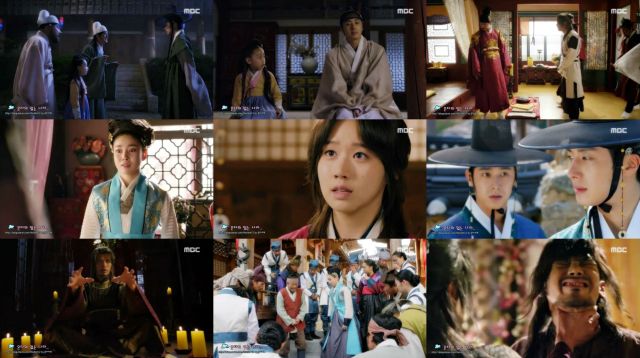 The drama seems to have finally decided that it's time for the lead characters to actually make an active effort to do stuff. Their goals aren't really very clearly defined, and Do-ha pretty much disappears, but hey, it's something. There's fights this episode! The good guys and bad guys are facing off against each other instead of messing around with this constant infighting, so at least we have an actual conflict to pay heed to now.

The storyline's also relatively easy to follow, as Sadam's techniques become more clearly defined. There's blowback to the lousy way he's been operating so far, and his efforts at a counterattack meet some form of resistance. I'm still not totally sure how the ghost rules work in such a way that his attack could fail, but still, this is the first time we've ever seen him fail at anything supernaturally related, so it's relieving to see some actual limits placed on the magical powers.

There's also a lot more emphasis here on unsolved mysteries, as well as what happens to the characters who try to investigate them. I don't have much faith in this drama's ability to actually answer these questions, but in the immediate term the implications are intriguing. Even if the ultimate explanation behind these events turns out to be dumb, it's at least plausible here that what's going on could be magical or non-magical, which works a lot better with the skeptical worldbuilding we've seen so far.

I wonder if that's the real problem "The Night Watchman's Journal" has had to date. Just that understanding anything that's going on doesn't make any sense in terms of past events. Looking at this episode as a fresh start, though, and ignoring all the silliness that's gone on up until now, we've actually got a fairly decent supernatural costume drama that's restrained in over-relying on special effects and magic in order to explain every single plot point.

Truthfully, though, it's hard to tell whether the drama really deserves this praise or if I'm just relived at not having to watch the same terrible form of scripting "The Night Watchman's Journal" has been using for almost the entirity of its run. Certainly, I'm not terribly optimistic that the drama's going to continue on an upward trend, since we're only one dumb explanation away from everything turning totally pointless. Still, for the moment I'm willing to accept the drama on its own terms.