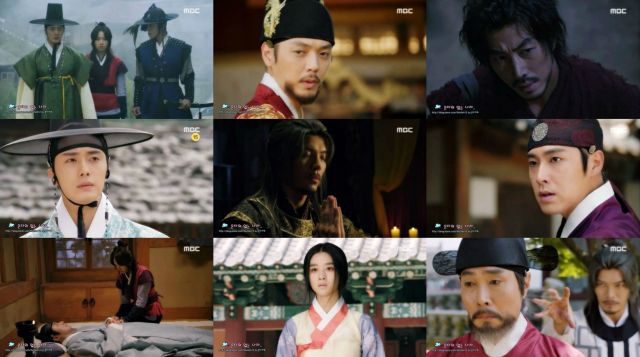 The alleged main characters in this drama barely ever actually do anything. At first I thought it was just the usual poor writing, but this episode manages to almost become interesting when Sang-hyeon just decides, you know, maybe we should actually be proactive about the whole ghosts skulking in the night murdering innocent people thing. His efforts aren't terribly successful but at least the guy's trying. Story of his life really.

Everyone else is just reacting to the various problems foisted upon them, and it's gotten to be terribly annoying. Even when the main characters are being assailed by mobs or cops or both it's hard to feel sorry for them because all of these situations could have been so easily avoided. We're halfway through the drama and still nobody can come up with a better plan than just running into each other at dramatic moments by accident.

The villains continue to do a much better job fighting each other than any of the heroes do fighting them. This part of the drama would almost be passable palace intrigue except that I've never been totally sure what Sadam's actual position in the royal court is, and why he seems apparently invulnerable to any kind of political maneuvering. He also gains another superpower this episode, although it will probably be some time before we find out what it does.

It's nice that the drama's building up to something, the trouble is that in the immediate term there's almost nothing actually worth watching. One particularly annoying scene actually tries to bring serious sexual tension in to the proceedings, but all this managed to do was remind me that I don't actually know either of these characters well enough to particularly care whether or not they get together.

Defining cast members in terms of actual personality traits is genuinely difficult, especially when considered across the run of the entire drama. The characters have goals but no apparent nuance underlying their actions. We're just dealing with a giant cast of stock archetypes who sort of interact awkwardly, like they're not really sure what to do with each other. I'm not at all sure what Lee-rin, Do-ha, and Moo-seok are doing in this drama at all. I mean from a literal perspective. The action would move a lot faster if they just weren't there and we were focusing on the characters motivated to actually do stuff.