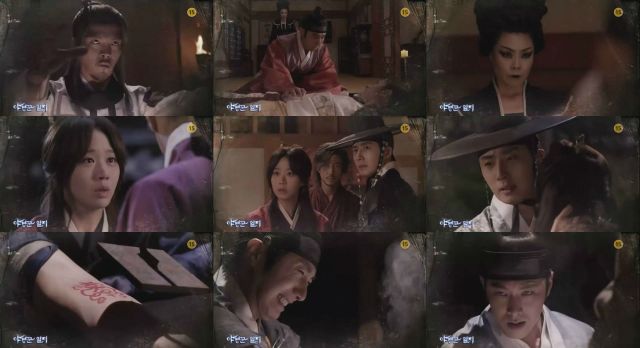 The early part of this episode doesn't even bother focusing on the heroes at all. It's just Sadam's wacky schemes and all the other villainous or semi-villainous characters are trailing behind in his wake, either impotently watching him do spooky evil stuff or impotently fuming about the fact that they can't stop him from doing spooky evil stuff. For quite some time it certainly seems that the writers have decided they don't actually have anything interesting for the heroes to do so, well, let's focus on the characters with actual motivation.

Then something amazing happens. In the first place there's some long overdue character development for one of the actual leads, which not only gives him an excellent sense of motivation but also gives us a lot more clues about who the ghosts really are and to what extent they have any allegiance to Sadam at all. This drama has spent so much time wielding ghosts as a generic weapon it's relieving to finally discover that they did, in fact, have actual personalities from back when they were still alive.

Building up on this, the leads actually take an oath and become, themselves, The Night Watchmen. It is, again, a moment that's long overdue but I'm just relieved it's actually finally happening now. No more screwing around with pointless gossip or random infighting about nothing. The leads all get cool new ghost-hunting uniforms and immediately set out to hunt down the ghosts and put an end to this spectral tyranny.

At this point, "The Night Watchman's Journal" has set the expectations so low that I don't really want to oversell this moment. All I can really state is that in the context of the overall series this episode actually manages to end with something reasonably compelling. There's logical deductions, sword fights, and consistently defined methods by which ghosts can be destroyed or dispelled or whatever. The details don't really matter. What's important is the drama is for once actually watchable.

I'm hopeful that the drama will continue along these lines, and have the heroes do more actual reacting to Sadam's various schemes instead of just standing around doing nothing. There is quite literally more story progress made in the plot just in this one episode than in almost the entire drama to date, and nothing that significant is even really happening yet. The action and the intensity is just doing a much better job demanding attention. It's exactly the kind of ghostbusting action this drama should have been managing from the start.