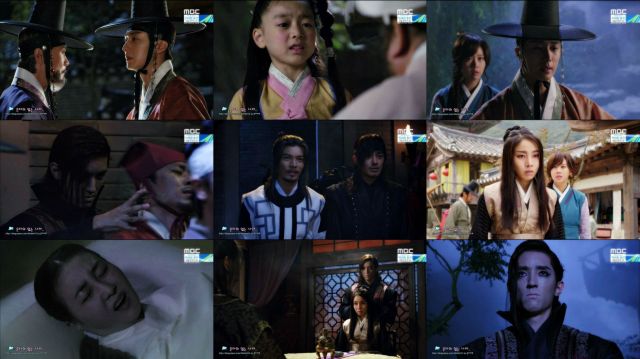 Sadam doesn't make much of an appearance here as "The Night Watchman's Journal" seems to be running an experiment to see how long this drama can move on without any kind of flashy actual villainous interference. It figures, really. Before it was all, let's kill people at random and start fires with magical ghost fires, but now that there's actually someone around paying attention to that stuff the action is mostly restricted to giant ghost congregations and passive combat.

The trouble is giant ghost congregations aren't really an action so much as they are just this thing that kind of exists, and it's hard to be all that impressed by something that pretty much just amounts to the casting director finding lots of extras, dressing them up in Joseon era clothing, and then have them all stand around looking at stuff. It's a good thing the drama explains what's happening because otherwise this would all be pointless in addition to being dull.

This has been a recurring problem in "The Night Watchman's Journal". The ration of exposition to action is really bad, and unfortunately, the quality of the acting isn't enough to make any of these conversations particularly engaging. The performances here are neither serious enough nor hammy enough to be particularly exciting, and mostly just draw more attention to the fact that most of the storyline developments here are just plain goofy.

Like the entire bit about Lee-rin's mother. I suppose I can at least give the drama points for consistency. Apparently people being murdered for no apparent reason in the palace has been such a common recurrence over the years that it's no wonder the corpse management system is so blasé. I know these incidents are supposed to inspire disgust at the villains who keep pulling them off, but again, the performances just aren't of a good enough quality to sell that. They look more like people doing an unpleasant job than they do real villains.

The heroes too, even if they technically accomplish a lot here, mostly fall into the same unimpressive not really all that inspiring dynamic that Sadam is. The drama's explaining what they do, and the explanations do at least sound kind of interesting. The problem is that we're not reading a book here. This stuff isn't supposed to left mostly to the imagination. Take away the supernatural elements of this drama and the story would look just about the same.