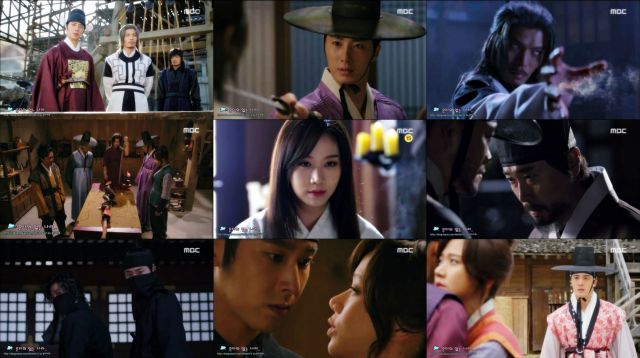 Apparently Sadam has the power to create evil clones from ghost toupees. Just when I think his abilities can't get any more bizarrely weird "The Night Watchman's Journal" finds more ways to make his wizardry absurd even in the context of magic ghost hunting. For what it's worth, I didn't actually mind the trick he pulled earlier on. It's nice to finally get the question clearly answered of why the heroes don't just murder him outright, although again, considering how many enemies he has with access to assassins I'm surprised this is the first time it's happened.

Speaking of assassins, that's apparently the new plot hook, although of the many attempts made here only one actually succeeds. I wonder if at any point the drama's ever going to acknowledge that it's mostly just presenting an argument for why the historical political system shown here is really bad. The only guiding rule for anything appears to be that the king can do whatever he wants regardless of how stupid, crazy, evil, and counterproductive it is. Not exactly a kingdom that deserves to be saved.

Still, for all these obvious storyline problems, we're at least moving forward in a clear coherent direction. The heroes take a stab at Sadam, the other bad guys take a stab at the king, and Sadam takes a stab at the heroes. While I can micromanage the individual logic of each encounter, it's mostly just refreshing to see that everyone is being proactive and actually doing stuff. Note that while the attack on Sadam isn't the absolute victory the heroes wanted, they did at least manage to destroy something and establish some ghost rules.

Speaking of ghost rules, one scene makes it look like we're actually going to get an explanation at some point as to why the good guy ghosts are just ineffectual comic relief and evil ghosts are able to murder people. Of all the continuity problems in "The Night Watchman's Journal" this one has been the most glaring, since there's no obvious reason for the comic relief ghosts to even be in the drama at all. That might change soon.

As usual, though, I must caution against expecting too much out of "The Night Watchman's Journal" at this point. The story elements are absurd enough that they'd be funny if only the drama could be more consistent about the action. I really wish there had been more of this kind of bad dynamic scripting from the get-go- then it would at least be entertaining to make fun of the drama. As it stands, the cliffhanger is possibly a preface to entertainment, or possibly a preface to just make the storyline even dumber than it is already.