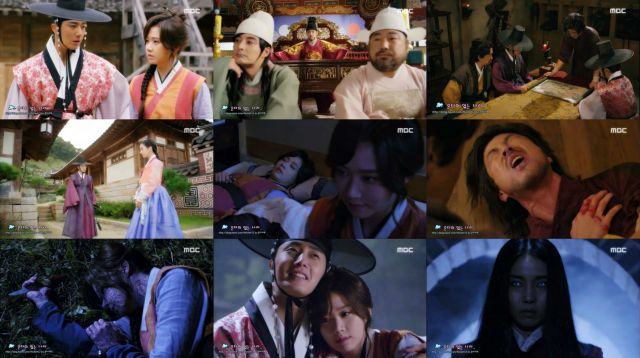 At this point it's hard to come to any reasonable conclusion about the characters in "The Night Watchman's Journal" save that they're all really, really dumb. So there are two Do-ha's, and the ghost detector is broken. Not only do the other leads fail to identify the fake Do-ha (apparently simply asking her personal questions was considered unreasonable) they don't bother to keep either Do-ha under guard. The results are predictable and stupid.

This wouldn't be so agitating except that the fake Do-ha doesn't act like the real Do-ha at all. She's very forward, sneaky, and winsome. These words that have never at any point defined the real Do-ha's personality. Note that even though the drama is expecting us to believe that Lee-rin and Moo-seok are credible love interests, neither of them apparently have enough of a grasp as to who Do-ha is as a person to be able to figure this out. One continues to be deceived even in a situation where it's painfully, stupidly obvious that he's dealing with the fake Do-ha.

He's not the only one either. Multiple characters are repeatedly fooled by the exact same dumb trick this episode. At some point I really have to wonder- has it never occurred to any of these people that they need to keep track of each other's movements? Like, maybe they should leave a note or something about where they're going and when they'll be back, and if they're not back in time go after this specific person and assume there's going to be another fight?

The only storyline movement this episode that's even remotely passable is about the ghost that's impersonating the king, although again, I'm not sure whether this is an actual ghost or a hallucination. How could a hallucination take over the king's body? Why would a hallucination want Do-ha? I know these questions don't make any sense, but that's all the drama is at this point. Nonsensical plot points that we're just supposed to accept for no apparent reason.

It's all too clear at this point that even if the actual plot makes literal sense, as any kind of compelling fiction "The Night Watchman's Journal" has quickly turned into a huge joke. It's impossible to take any of the action here seriously because the resolution of every single storyline obstacle hinges on the question of how idiotic the heroes' plan for dealing with the situation is, or whether they even have a plan at all. I mean for pity's sake, Sang-hyeon. Why were you even hoarding those artifacts in the first place when something like this was bound to happen?