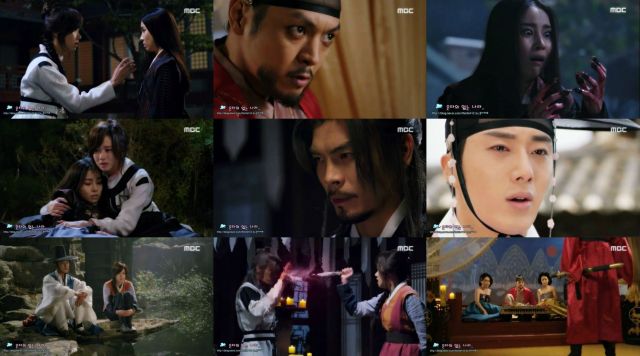 Once again noble stupidity rules the day. It's not great but it's at least better than regular stupidity, since the characters do have reasons for lying to each other. Even if the reasons aren't very good, there's at least a long term deliberate effort here that shows they're thinking about the possible consequences of their actions. Now if only they could go into actual fights with that kind of mind-set...given that we've already clearly established that Sadam can't be easily killed even by a group, it's inexplicable why characters take shots at him alone this time around.

Beyond that, most of the essential plot information appears to be out in the open now. At least I'm assuming- there's enough that's been clearly established at this point to set up the finale, but that hasn't stopped the drama from pulling out essential heretofore unrevealed at the last minute earlier. In the context of the problems "The Night Watchman's Journal" usually has with world building, well, this is really just more of the same so it's not like any of this is a surprise.

Oddly, there are some reasonably effective scenes here, they've just had frustratingly little build-up. It's explicitly mentioned at one point that, in fact, Do-ha's entire character motivation has been to just find her sister. The trouble is that she hasn't been very proactive about this. Nearly every lead she's found has been pretty much by accident, so there's no emotional thrust behind the plot point being resolved once and for all.

What's especially strange is that when you think about it, Sadam is the only reason Do-ha has been able to do much investigative work at all, since he's always attacking in such a way that reveals way more of his plan than he should really be bothering with. Although to be entirely honest I'm never sure whether characters are making actual deductions or if they're just pulling new information out of nowhere, so who knows where credit should be given there.

In any event, in terms of being an exciting fusion drama about ghost action, this episode is actually a fairly good one because it manages to be understandable, with the main plot mix-ups being forgivable in the broader terms of just moving the story. I'd be willing to give the drama the benefit of the doubt in regards to what's going to happen next except that, well, this has never really worked out that well before.