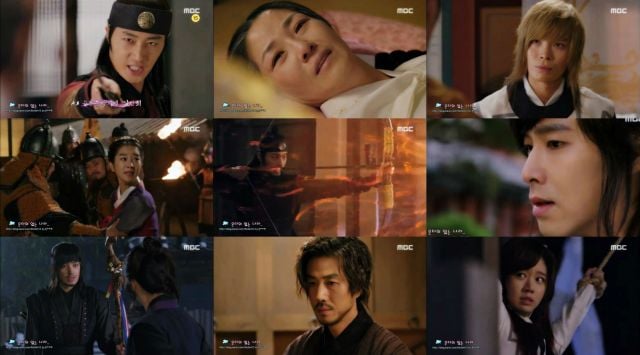 This time Sadam's new power comes in the form of the ability to dominate the mind of security guards and force them to fight one another. Also he apparently has the ability to prevent anyone from commenting on this once the mental domination is over. It's been well established by now that nobody in the palace cares about random violent deaths, but even in that backdrop the inability of anyone to so much as point out the fact that Sadam is obviously some kind of evil wizard takes on pretty ridiculous proportions here. By the end of the episode he's practically reenacted the evil ritual that set the whole drama off while the entire royal court watches without comment.

What puzzles me the most about Sadam's motivation is that I'm not even sure why he needs the dragon in the first place. He has so many ridiculous magical powers at this point that it seems like he could accomplish any practical goal without having to resort to arcane rituals. Remember in the first couple of episodes, when he had an army of followers? Whatever happened to those guys? It's a question that hasn't come up mostly because as far as we can tell Sadam is capable of doing everything on his own just fine.

The other problems in this drama are, well, just the same old problems really. Nobody has a guard, not even members of the royal family. Everyone spends way too much time hearing Sadam out instead of just doing whatever they were going to do anyway. We almost get some fights this time, but then the drama cuts away to extended special effects stand-offs. At least the cliffhanger makes it look like there's going to be an actual battle to finish the drama off.

What makes all these problems particularly irksome is that "The Night Watchman's Journal" has plenty of background elements and characters which for the most part have never really been utilized. One of the comic relief ghosts sort of almost has an important part to play in the story here, but the lack of build-up mostly nixes the emotional impact of the scene. Character death is only really meaningful if we cared about the characters in the first place.

About the only positive point I can come up with the drama is the costume department. While Do-ha's initial outfit was an obvious misstep, this was eventually fixed, and the wardrobe personnel come up with a nice collection here of old and new outfits that add some good visual flair to the scenes. I like how, for the most part, the heroes' costumes act as camouflage, and even their special ceremonial outfits here blend in decently. A pity the rest of the drama wasn't produced with the same sense of forethought.