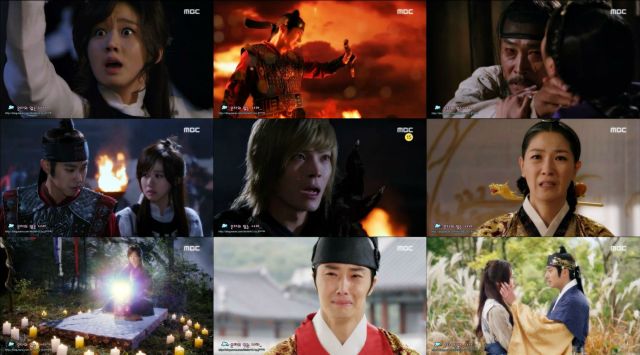 The drama ends unpredictably, mostly because all of the elements that make up the climactic battle and resolution hadn't been adequately foreshadowed. A significant part of the fight against the dragon ends up taking place in the spirit realm of all places. What is the spirit realm anyway? Everybody's always heading into it for one reason or another but aside from the occasional mock fight there's no obvious reason for the place to exist.

That sums up "The Night Watchman's Journal" as a whole, really. This has consistently been a drama with pretty much no apparent point. Sadam's downfall here is mostly arbitrary. Once the dragon goes down we discover that there was apparently another means for Sadam to achieve his goals that looks a lot less complicated. Or maybe he's just more desperate? In any case, it could have happened at any time during the last twenty episodes except that there were all these schemes going on that required arbitrary resolutions. Well, that and the secret-keeping.

Yes, right until the end, the heroes continue to keep essential plot information hidden from each other for no apparent reason. Like most of the problems in the drama, this is the result of clumsy writing. In order to maintain dramatic tension it's necessary to keep the audience in the dark about certain facts so we're surprised when the problem is resolved. The trouble here is that so much is obscured that the narrative itself is nearly impossible to even process, let alone predict.

While the drama does manage to resolve such simple questions as what everybody's doing a year after the final battle (at least I'm assuming that's how long it's been), basic questions about the setting yet remain unresolved. I am very concerned about the structure of the government, for one thing. What happens if Lee-rin also touches an evil flower and becomes dumb and crazy for no reason? Shouldn't people be more worried about ghosts after that whole huge stunt by Sadam?

I'm sure I'm putting too much thought into this. In the end it doesn't really matter anyway. "The Night Watchman's Journal" is, and always has been, light entertainment with attractive looking young leads fighting ghosts. I suppose for the seriously disinterested viewer who really doesn't want to put any thought into the story at all the drama overall might be a passable way to waste time. But that's pretty pitiful praise indeed for a story whose only plot points I can remember are the unbelievably stupid ones.