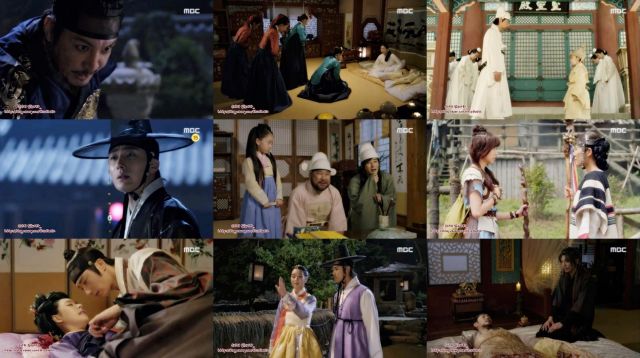 And now the drama transitions into action comedy. This would probably come off a lot better except that the beginning of this episode is still dealing with Hae-jong's insanity, and the transition is an awkward one. One minute we're going from an insane rampage and mass executions, then the next it's wacky ghost adventures. In the exact same episode "The Night Watchman's Journal" uses the fact that most people can't see ghosts both to demonstrate insanity and also to make jokes.

I found myself wondering what exactly the political structure of the government is in this drama. Most of the time I can just accept that archaic Korean government systems function under different rules, but "The Night Watchman's Journal" is especially complicated by the fact that magic clearly exists. There's an entire special squad of soldiers who are familiar with magical properties. Shouldn't the existence of magic create some sort of legal grey area in the event that people go nuts? Why do we need to resort to executions? Wouldn't an investigation be more prudent?

These are just some of the many cascading problems that have resulted from the unwillingness of this drama to provide anything in the way of clearly defined rules explaining how magic works. The tension in the opening scene is largely worthless, because we have no context with which to judge whether the attempt to seal off the spirit possessing Hae-jeong is going to succeed or not. And assuming such magic exists, why didn't it get used earlier?

Yes I am perhaps being a bit of a spoilsport here in expecting the drama to have some sort of explanation as to how anything works, but this is what happens when the production team does a bad job handling tonal transitions. I simply wasn't in the mood for light-hearted humor because all this awful grim stuff had just happened for pretty much no reason. I can't even ignore the bad mechanics for the sake of characterization, because there isn't any characterization. We're still waiting for the actual main characters to show up.

Fortunately that does finally happen here, although it's a little abrupt and I'm not totally clear on why the bad guys just decided to take a decade long nap. I'm also at a loss to explain Do-ha (played by Ko Sung-hee). Why does her outfit have a hole in the front? It's a perfectly good costume outside of that one weird, inexplicable design choice, and it was there when she was still a little kid, too. Well, whatever. At least Do-ha has a clearly defined goal, which is more than I can say about any other character right now.