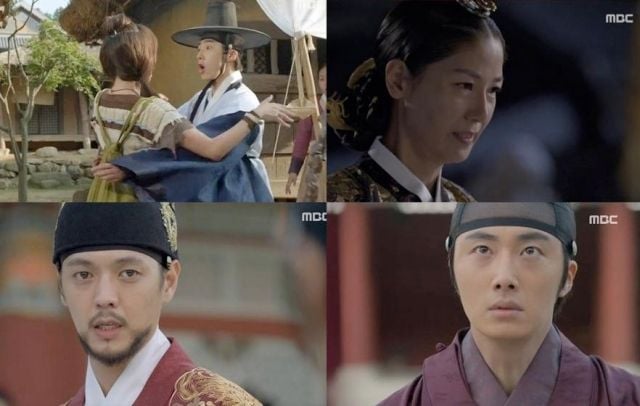 Well the tone is at least consistent now. The king's still crazy, but since super dark and evil stuff isn't happening the ghost related antics go down a lot better. In all honesty these jokes still aren't particularly funny. Mostly they just highlight the essential problem with the character of Lee Rin (played by Jung Il-woo). He doesn't have much motivation beyond just not wanting to be harassed by ghosts. If Lee Rin wasn't such a jerk his situation would probably come off as sympathetic.

Amazingly, the plot still isn't coming together, although the contrivances of the script are certainly working on it. One way or another nearly every main character meets every other main character this time around, usually through sheer outrageous coincidence. Lee-rin and Do-ha alone manage to meet inadvertently three times. I can't help but feel there was a more organic way these encounters could have been orchestrated.

In terms of the good, we finally get some explanation about how magic works, specifically in the form of what techniques can be used to repel ghosts. I can see why this wasn't discussed earlier, since the question immediately comes up as to why the palace wasn't warded off this way, given that Hae-jong knew that he'd just gotten into a fight with a bunch of dudes who were buddies with evil ghosts. Still, at least in the context of the present situation, there are now limits to what the ghosts can do, necessitating workarounds.

So, the drama now mostly has a working story, aside from the occasional plot hole. This is an improvement over what we had before, but it's still such a minor one as to barely be worth noticing. I'm still completely unsure what "The Night Watchman's Journal" is trying to accomplish. The conflict is moving at such a slow pace I'm really not sure why the drama bothered with an opening episode of epic CGI fights. We could have just started with everyone as an adult and explained the rest in flashback. It would have made about as much sense.

At the very least, such prudence would have gotten us two episodes closer to figuring out what exactly "The Night Watchman's Journal" is. As far as I can tell, this drama does not take place at night, does not have a watchman, and it does not have a journal. And don't blame the translators for this- the title's pretty much exactly the same in Korean too.