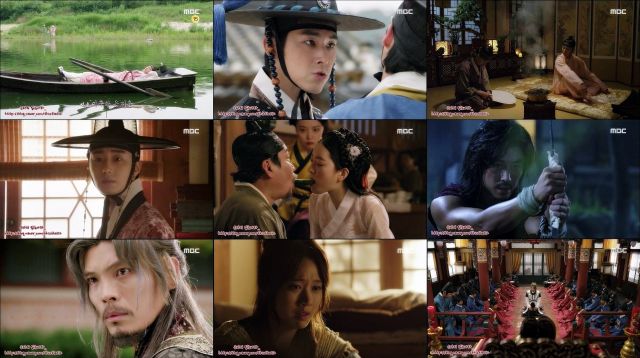 This episode opens up with Lee Rin again trying to avoid ghosts. I'll admit there is some humor to be had in the sheer extremity of his efforts. At the same time, it's extremely aggravating that the characters in "The Night Watchman's Journal" are making such a strong effort to avoid actually doing anything. It's hard to have a drama about ghosts when a substantial portion of the cast refuses to acknowledge that ghosts exist and interrupt the characters that can see them.

Trying to keep track of character knowledge writ large is also getting to be a pretty big headache. We've got Lee-rin, Do-ha, Moo-seok, Gi San, and Sadam all in the same general vecinity trying to meaningfully resolve a mystery and not one of them appear to be on the same wavelength as to what's going on. We've got five completely different people with five completely different agendas that don't really overlap in a coherent way. I'm not even totally sure why they all have a stake in this particular mystery.

The conclusion to this particular plot thread is also similarly perplexing. Ghost assassinations? That's a thing? I get that Sadam is an evil dude who can make ghosts do stuff but, uh, why? And how is this ability supposed to be countered? I'm being ridiculous, I know- in all likelihood we're never going to see Sadam do this again even when circumstances come up that would be much more fortuitous than what happened this episode.

The continuing basic problem in "The Night Watchman's Journal" is motivation. What do any of these people even want? The drama's throwing them all together without really considering the fact that these meetings contain practically no urgency when they don't fulfill any particular goal. I was constantly wondering why Do-ha had to be present for any of this at all. She's practically a background extra.

Mind, this drama could definitely use more extras, or just actors who don't have that many lines. Most of the great costume dramas have lots of scenes where characters just huddle around a table scheming. The technical reason for this is that such scenes are very easy to film but in practical terms such scenes do an excellent job setting up the stakes, giving the viewer expectations that will either be confirmed or broken when there's finally a confrontation. "The Night Watchman's Journal" isn't building anything up. It's just mashing everything together and expecting me to care. It's not working.