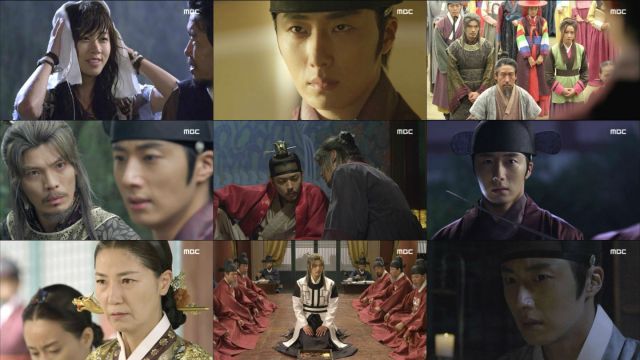 Do-ha is treated rudely by nearly every single person she meets. This isn't for any rational reason, like her ridiculous outfit. On multiple occasions this episode she saves other characters for practically no reason at all. Yes, Do-ha does have the sort of distant hope that maybe they'll help her out, but for the most part it's just, Do-ha acts nice and helpful, and the other person responds by telling her to bugger off. Sadam was more thoughtful and considerate to Do-ha than any of the people she's actually supposed to be working with.

"The Night Watchman's Journal" is really taking this whole bit about stalling the plot way too far. If these are the heroes who are supposed to do away with the evil ghosts once and for all, we're already doomed. Moo-seok is a nice enough guy, but he inexplicably gets the least amount of exposition of the main cast, most likely because he doesn't really have much to do except stand around and be a nice guy every once in awhile.

I do like that probably the main reason Lee-rin is in such a crisis point right now is because he was so inconsiderately rude to Do-ha in previous episodes. Unfortunately this doesn't really count as comeuppance considering that the bad guys are still going after him, and Lee-rin still needs to be rescued however lousy a main character he's been turning out to be. I'm not terribly optimistic that the guy's going to get an attitude adjustment, even after facing a near-death experience.

The villains' end isn't much more inspiring. As far as I can tell the bad guys really are completely incapable of coordinating their evil activities so that they don't screw up each others' plans. They have the upper hand right now mainly because the heroes can't be bothered to actually get any of their own plans together at all- they're too busy being hostile to Do-ha.

I get that this is a common way for misfit teams to get thrown together. At first they're always fighting until they realize a common goal, then they unite to take down evil. The problem in "The Night Watchman's Journal" is that this phase is taking way, way too long, to the point that I'm frankly sick of even looking at most of these characters. Oh, and one more thing- doing a joke about the low standards of Joseon-era striptease really doesn't work when Do-ha's costume has a hole in the middle of the torso no reason.