[HanCinema's Drama Review] "The Prime Minister and I" Episode 1 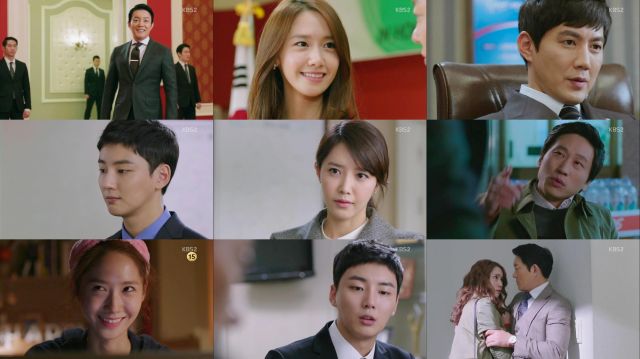 As far as tabloid reporters go, Da-jeong (played by Yoona) is pretty incompetent. The first we see of the woman attempting to do her job, we find that she is using what can best be described as the largest, loudest camera available for a task that requires stealth. Her sense of subtlety is practically non-existent. Da-jeong doesn't seem to appreciate that working for an outfit with a name as ridiculous as Scandal News means she can't even give out her business card without being mocked. Peers and interviewees both view her with thinly veiled disdain.

Most of the humor in this first episode comes from Yoona's ability to sell Da-jeong as an optimistic, cheerful, aggressive woman who is aiming her efforts very poorly at living a dream which she should really just give up. We're not really laughing with Dae-jeong as she tries to take on the world with her smile. We're more laughing at her because it's obvious that basically no one even likes the woman outside of her immediate co-workers at Scandal News.

The conceit behind "The Prime Minister and I" is a relatively absurd one to begin with- somehow Da-jeong ends up marrying the Prime Minister after having known him for at most two months. It's about the nuttiest idea possible- but I'm already well enough convinced that somewhere in the recesses of her mind Da-jeong has decided this was somehow a brilliant plan. One that she regrets, no doubt. However, she's clearly the type too stubborn to admit that something was a bad idea just because of inconvenient stuff like bad results.

Da-jeong's opposite number here is the Prime Minister himself, Yool (played by Lee Beom-soo). Now this is a man who hates fun. I wouldn't expect most prime ministers to be terribly thrilled about being asked questions by a gossip columnist, but Yool takes this stuff particularly personally, and with a fair amount of disdain to boot. I like the sheer contempt this man seems to have for just about everything. Even when we find out why he has such a bad attitude, it doesn't really make him see all that much nicer.

The characterization is top-notch, and the comedy we see this episode is particularly strong resting on the back of these two leads. The question yet remains- do they have much chemistry? One scene in particular seems determined to convince us that these two make an enticing couple, but I'm not so sure yet. But at the bare minimum, I am interested in and like these characters, and would quite like to see how these two stumble their way into thinking that a fake political marriage is somehow the best possible plan.

"[HanCinema's Drama Review] "The Prime Minister and I" Episode 1"
by HanCinema is licensed under a Creative Commons Attribution-Share Alike 3.0 Unported License.