[HanCinema's Drama Review] "The Prime Minister and I" Episode 10 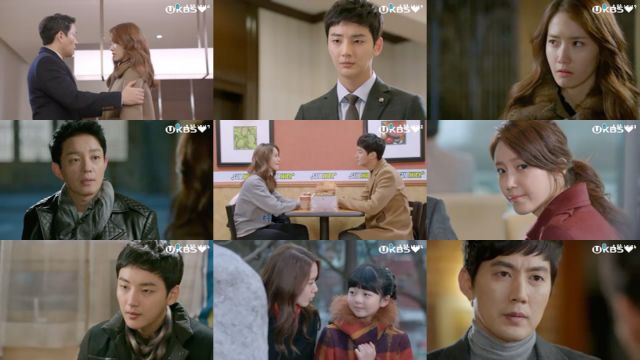 Has it really been 100 days? I'm asking that literally- I don't really remember how this drama has been keeping track of time. At the beginning there was this kind of confusing thing where we started in the present, then flashed back two months earlier, then somewhere we must have gotten caught back up again but it's hard to tell where exactly. It's a problem with the tone of the storylines, which feel urgent and unresolved so it's hard to figure out a precise timeline.

Fortunately, this kind of stuff really isn't that relevant to appreciating "The Prime Minister and I" as a whole. The 100 days ceremony is less a concrete definable event as it is a benchmark in the relationship between Yool and Da-jeong. Granted, the marriage is a sham- but Yool certainly must have some opinion about Da-jeong by now, and the question naturally is what?

I like that Da-jeong isn't really sure either. She goes through several different versions of what Yool might say in her imagination- all silly in their own way, while still being all too well-informed as to the kind of man Yool is. But the real thing manages to come out even better than that. There's a genuine sincerity in Yool's performance at the end that's palpable, even as the attentive viewer may note that he's using weasel words to avoid saying anything that could be seen as an expression of romantic love. Still, even the fact that he goes to that much trouble is significant.

The comedy is fairly solid throughout. The bar scene feels like a missed opportunity. I was kind of hoping for an actual fight to break out, but perhaps the wages of humor there aren't worth the absurdity necessary in order for the Prime Minister to get into a barfight without getting into big trouble over it. I could have at least done with that sneaky reporter salivating over the prospect though.

One of the odder developments of the story is that even though forces are clearly aligned to take Yool and Da-jeong down, for the most part they're unaware of any threat because all the scheming and wheeling and dealing happens while they're not looking. Strangely, the supporting cast seems to play much better off of each other than they do with either of the two main leads. But it's a level of segregation I can appreciate. The tone does a good job of keeping the situation tense without making Yool and Da-jeong look like idiots more interested in clowning around than facing the serious existential threat to their livelihood. Did you hear that "My Love from the Star"?

"[HanCinema's Drama Review] "The Prime Minister and I" Episode 10"
by HanCinema is licensed under a Creative Commons Attribution-Share Alike 3.0 Unported License.