[HanCinema's Drama Review] "The Prime Minister and I" Episode 11 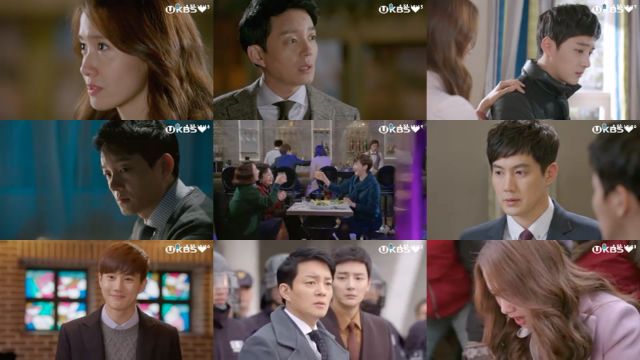 The political and romantic edges of the plot brush up against each other here, as we've barely even started out and Yool makes a statement that appears to be completely at odds with his serenade. I really like the sense of mystery Lee Beom-soo is able to pull off here. His actions are consistently inexplicable to Da-jeong, to the point she can't really guess why his emotions keep turning around the way they do. Even we in the audience are a little befuddled until the flashback explanation comes up.

Excellent use of flashbacks here, by the way. Evidently Da-jeong has been doing lots of stuff in the Kwon household while we haven't been looking. The change in the kids' attitudes seems pretty extreme considering just a few episodes they regarded her with thinly veiled hostility. But then, remember, we're seeing things from Yool's point of view. He doesn't have any idea what's been going on, so we in the audience are seeing these new household innovations with the same sense of surprise that he is.

I like that, even after just 100 days, the influence Da-jeong has had on the household can't be flippantly tossed aside. It's funny watching Yool trying to replicate all the little things and for the most part getting them wrong. While it's clear he thought through the personal emotional consequences of cutting Da-jeong out, as always the man still has trouble figuring out what his kids want and need.

Speaking of which, we finally get to see more of Yoo-sik! Granted, he lives in a hospital for a reason, but I just really like the rapport the man has with every other character. I like that as long as he's playing Go-Stop...well, for the most part he's indistinguishable from any other grandpa. The guy's got a lot of charm, and I'd really like to see him take on a bigger role in this drama. That would require an expanding definition of family, though.

Which we might get to soon enough, given the cliffhanger. Admittedly, most of the surprise and the shock was ruined by its inclusion in the last episode's preview. Really clever there editing department. I'd completely forgotten about that particular blood bit until about halfway into this episode and then I was just impatiently waiting for it. As usual, "The Prime Minister and I" has a smattering of minor flaws. Luckily, they're forgivable ones in the context of a wider sweet story about familial affection with politics tossed in for extra drama.

"[HanCinema's Drama Review] "The Prime Minister and I" Episode 11"
by HanCinema is licensed under a Creative Commons Attribution-Share Alike 3.0 Unported License.