[HanCinema's Drama Review] "The Prime Minister and I" Episode 12 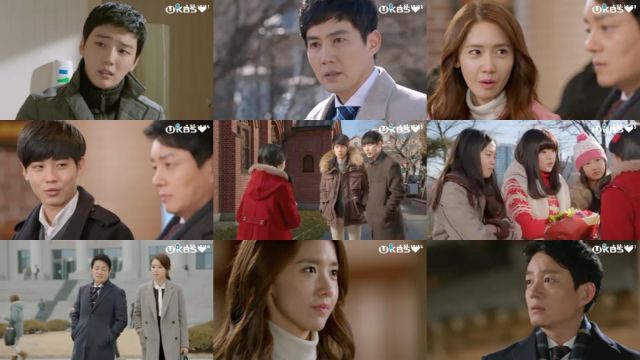 No, the cliffhanger from last time has not completely changed "The Prime Minister and I" into a medical drama where everyone spends their time at the hospital. There wasn't actually a lot of drama on that point even at the time, given that the previews clearly showed Yool up and walking about. The man's still a little sore from his injury, but for the most part he's able to go about his daily life unimpeded.

So, given all this, what was the point of the attack from a narrative perspective? As of yet it's not clear who attacked Yool or why. Nor do any of the characters seem to have any idea. There's an interesting clash between a couple of them over this very topic. When a person has been acting in a villainous enough way that someone else can seriously accuse them of being involved in an assassination attempt, that's a moment that really needs a reflective pause. Vengeance against Yool is starting to look, well, kind of mean and pointless actually.

The actual comedy in this drama is pretty decent on its own. There's a great bit of mistaken identity when some characters accidentally bully their way into the wrong hospital room. But if we actually manage to resolve the plot against Yool by just having the villains give up having realized they're being vindictive jerks, now that would be an absurdist laugh. It would also be all too appropriate given the lack of emphasis this drama has been placing on the revenge stuff lately.

This is in synergy with its strengths, though. Consider the scene where Yool tries to watch the news to get some idea why this guy came out of nowhere and stabbed him. Da-jeong just walks straight up and turns the TV off. This stuff doesn't actually matter to Yool. It's not going to help him do his job or reassure his family if the man becomes obsessed with the plot against him- so why bother stressing about it?

At the very least "The Prime Minister and I" knows exactly what it is- a family drama about coming together with the politics stuff being used as a loose framing device. Da-jeong meets significant milestones in this episode in terms of her role as wife and mother. And it only just now occurred to me that it's kind of politically incorrect to show these as her primary ambitions, but you know, who cares? She's good at this stuff. Why bother living life being miserable just as long as you're doing it correctly?

"[HanCinema's Drama Review] "The Prime Minister and I" Episode 12"
by HanCinema is licensed under a Creative Commons Attribution-Share Alike 3.0 Unported License.