[HanCinema's Drama Review] "The Prime Minister and I" Episode 16 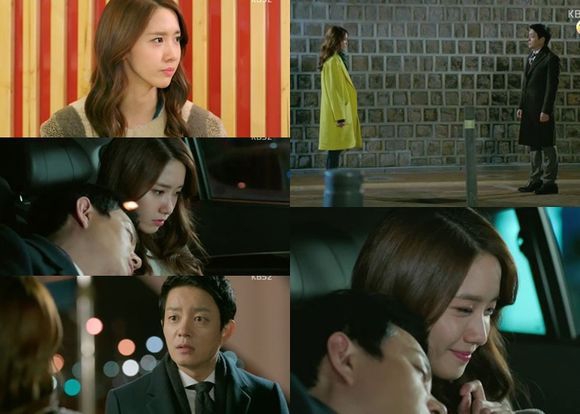 The drama takes a turn for the somber this time as characters mull over the latest dramatic developments and continue to prevent anyone else from doing anything. Yes, it would appear that "The Prime Minister and I" has received a single episode extension- and while nothing here is really wasted time, it still feels like the narrative is tap dancing around the the main question of what's going to happen with Na-yeong. The drama is very evasive regarding what anyone's long term plans are.

In the short term one thing is quite clear. Yool wants Da-jeong to stick around. It's surprising just watching him make this much of a deliberate effort. Even in his most romantic scenes Yool typically holds back. Here, though, the man makes a very clear to Da-jeong that he wants her around- not in a desperate needy sort of way or anything. At one point he just states it as a clear indefatigable fact.

There's a lot of discussion of their original motivation in the sham marriage, and the timing is fairly appropriate, given that Da-jeong's dad now appears to be in some sort of mild crisis. How serious it is won't be clear until the next episode- as usual, though Lee Han-wi's scenes are a highlight. Sure, technically he's dying, but he still just wants to have a good time. The scene he gets with Yool's kids is a fun one.

Speaking of the kids, we finally get some movement on their being clued in to what's going on. The drama's been spending most of its energy trying to persuade us that Yool really has made a break with the past, and doesn't have any major lingering feelings for the mother of his children. That's a much harder sell to make for the actual children though, and I remain unconvinced that the drama's actually going to pull it off.

Still, the writing is making a good job of closing off the loose ends. The issue of the obvious scandal involved in the prime minister technically being a bigamist is mostly sidestepped by another decision Yool makes. Is he motivated by avoiding the headlines, protecting his family, or doing career political work that's less, well, political? The answer is most likely a combination of all three. It's a rather holistic statement actually, and says quite a bit about the man's character development, given such a choice would have been inconceivable in the early episodes. It remains to be seen whether Da-jeong's character arc will be as convincing.

"[HanCinema's Drama Review] "The Prime Minister and I" Episode 16"
by HanCinema is licensed under a Creative Commons Attribution-Share Alike 3.0 Unported License.