[HanCinema's Drama Review] "The Prime Minister and I" Episode 17 Final 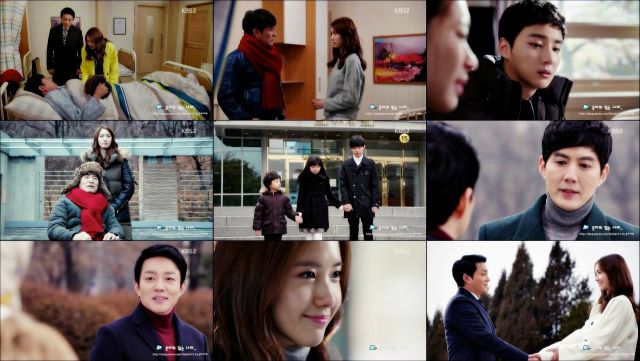 I've been thinking ever since Na-yeong came back that it seems like the drama's writers aren't doing much with her. It's only this episode that I realized in some sense there's not much for Na-yeong to do. Her brother and his wife are glad to have her back. But an adult sibling doesn't rely on or need a sister as much as a man and his kids need their wife and mother. The question of abandonment is a strong one, and I could see here how the survivors ended up feeling ambivalent.

Mind, it took a bit of squinting to get there. "The Prime Minister and I" doesn't deal much with this issue directly. We don't even get to see what Na-yeong is doing in the afterword. Once more the focus is on the relationship between Yool and Da-jeong, and whether they will or will not continue seeing each other. The answer is...kind of ambiguous. It makes use of all the plot devices seen so far and sets everything up reasonably logically, but there's not that much punch to it.

Most of the feeling here comes from the hospital scenes, where we find one character to be on their last legs. I liked this denouement- it had a good emotional impact. Unfortunately I realized that even though we've been spending lots of time in the hospital lately, it really hasn't been much of a focus for this drama at all throughout the entire middle of the drama's run, which was dominated by romance and spy antics.

Ultimately the introduction of Na-yeong into the storyline derailed a lot of this, such that in many ways the ending of "The Prime Minister and I" is a completely different drama than the zany episodes that preceded it- a fact made all too clear in the wistful flashbacks we see, which depicted a drama with a much wackier sense of humor and a lot less brooding. It's kind of weird to watch this episode and see resolutions to subplots which for the most part didn't even exist.

As an ending, I guess this is all right. I can't imagine it will make anyone angry, but it's really more of a case of lost potential. From a rational perspective, everyone is playing it safe and making mature adult decisions on how to proceed. That's probably and easy position to take when there's one person who has destroyed her life by going into hiding for no reason. Still, it might be a bit of a lesson as to why many dramas resort to outrageousness to grab viewer attention. While I can appreciate where these characters are coming from, this alone does not make them that interesting to watch.

"[HanCinema's Drama Review] "The Prime Minister and I" Episode 17 Final"
by HanCinema is licensed under a Creative Commons Attribution-Share Alike 3.0 Unported License.