[HanCinema's Drama Review] "The Prime Minister and I" Episode 2 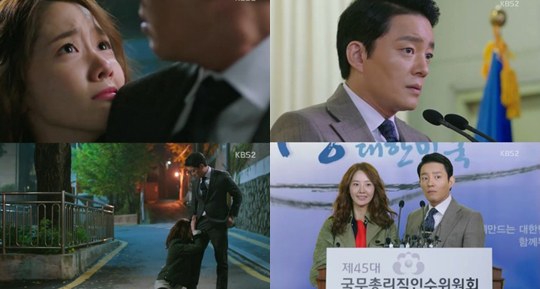 The drama's still working on justifying its rather absurd premise. For what it's worth, the escalations are convincing enough I might actually buy this storyline even if it wasn't framed by the knowledge that Yool and Da-jeong are eventually moving into a sham marriage. There's just this great sense of mounting disaster as reactions keep piling up to the latest step in the scheme that forces our leads to keep going on with the charade.

We've finally found something that Da-jeong is actually good at- making up ridiculous yet plausible stories on the spot. So far there isn't anything that could really be pinned down as an inconsistency. She very wisely avoids getting overelaborate in the logistics of how she and Da-jeong supposedly got together. Everything is framed in the context of events that lots of people saw, but deals with emotions that would be impossible for anyone to actually know outside of Yool and Da-jeong.

Yool, not being as silly a person as Da-jeong, still isn't fully convinced. He has to do a lot of soul-searching, which involves having to listen to the opinion of personal staff, before finally reluctantly agreeing to go along with the scheme. I'm still not sure I found the arguments this drama presents to be convincing enough for him- but again, the main objective right now is to justify the premise. It's not like there's any ambiguity over the choices he's going to make right now.

The humor is still reasonably strong, and builds a lot off of what we saw last episode. I like the continued sense of past events creating present conflicts because all the characters are so used to tabloid-style culture that it's beyond their comprehension for something a bit more complicated than that to be the actual explanation. It's becoming clear why Yool is viewing the world as being a place of such little joy. It's bad enough that his wife died, but then he has to go to work and do damage control for stuff that hasn't actually happened as opposed to, you know, helping people.

In the end, though, what ends up cementing the whole marriage deal is actually Da-jeong, who finds unexpected consequences for the scheme coming from an unlikely place. I'm a little surprised at how blunt the drama is about death trauma, given that this is a romantic comedy. Usually these kinds of narratives wait a bit before trying to engage the viewer seriously like this. If nothing else, "The Prime Minister and I" certainly has confidence in its own storytelling.

"[HanCinema's Drama Review] "The Prime Minister and I" Episode 2"
by HanCinema is licensed under a Creative Commons Attribution-Share Alike 3.0 Unported License.