[HanCinema's Drama Review] "The Prime Minister and I" Episode 4 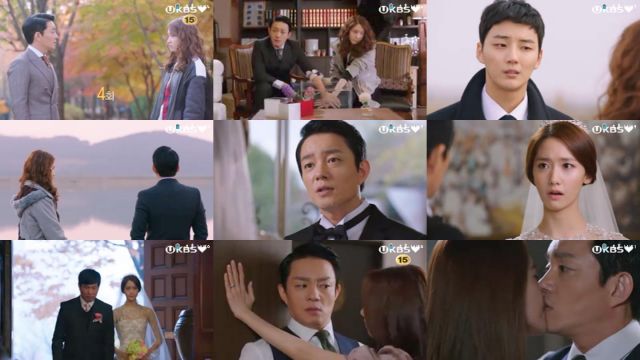 We start out this time with an exploration of public face versus private face. Note how Yool is extremely rude and pushy to Da-jeong whenever they're alone together, but whenever there's an audience, he's much better at keeping himself polite and decent. Yet even in these moments he's nowhere near plausible as her lover. The crux of the entire deception lies on the assumption that they're more intimate behind closed doors. Yep, this is definitely a situation that qualifies as comedic irony.

More interestingly, we see this influence reflected in Yool's children. It's the first clear clue we're given of what kind of values he's instilled in them. Well, the older two anyway. The ones who can actually remember their mom and can thus appreciate the passive-aggressiveness necessary in dealing with their dad's new fake wife. A great deal of the actual storyline here is dedicated to the results of a prank- which judging by Yool's reaction, was a predictable one.

The slapstick is quite good here. I credit this mostly to the energy of Yoona's performance. Da-jeong certainly looks like she's putting in the maximum effort necessary to extricate herself but her inability to properly plan and think rationally grossly inhibits her efforts. It's nice to see that Yoona's chemistry with the kids is coming from the same bedrock that she gets from playing opposite their dad. It makes for a nice parallel.

This episode is actually quite strong with these parallels, generally speaking. The other main storyline event concerns the meeting between Yool's family and Da-jeong's dad Yoo-sik (played by Lee Han-wi). They're lucky he has dementia, or else he might see through some of the absurdities in this plot. Not that this makes matters any more difficult for Da-jeong. While she seems to have accepted the fact that this deceit is necessary, certain realities of her father's current life are a bit more unnerving.

The storyline of "The Prime Minister and I" is strong and well-bolstered by the quality of the performances. The only thing that could reasonably be called a flaw at this point is the absence of a clear, broadly defined conflict series wide. Tabloid reporters are largely absent this episode, even though the action culminates in a wedding. It's as yet difficult to tell whether this was because there were too many other localized conflicts for this episode's script to deal with, or whether we're moving on to a completely different villain entirely than the first few episodes implied.

"[HanCinema's Drama Review] "The Prime Minister and I" Episode 4"
by HanCinema is licensed under a Creative Commons Attribution-Share Alike 3.0 Unported License.