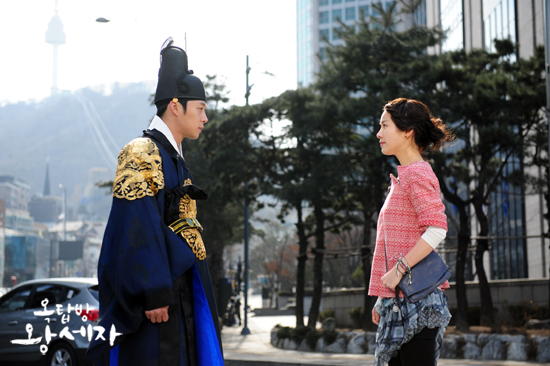 Korean costume dramas tend to have a huge air of seriousness about them. This is probably thanks in large part to the crazy looking costumes, which call a lot of direct attention to how overly dignified the situation is. They still have their moments of humor, but ultimately even in more comedic takes on the drama there's still going to be more viewer emphasis on the serious elements out of sheer habit. "The Rooftop Prince" takes the inventive approach of, if not making an actual costume drama, at least taking stock characters from the genre and forcing them into a situation where they can't be serious, no matter how hard they may try- the modern Korean peninsula.

Lee Gak (played by Park Yoo-chun) is a Joseon-era prince embroiled in the regular intrigues of court who, in order to solve a murder, ends up forming an entourage of skilled servants and accidentally winding up in the future. They arrive on the roof of Park Ha (played Han Ji-min), who's agitated to find that a quarto of deranged lunatics has somehow landed on the roof of her home, but she is soon forced to take responsibility for them. Lee Gak quickly discovers that the solution to the murder in his time period is part of a destiny that's replaying itself in modern times- and has to get to work finding it.

The strength of "The Rooftop Prince" lies principally in the way Lee Gak's group is forced to adapt to the present. Because the drama frames the story as being principally rooted in the Joseon era (and the audience, in turn, expects certain attitudes from those kinds of characters), their misadventures trying to adapt to modern Korean life inspire a great deal of empathy. I don't want to spoil any jokes, since they're the main part of the show's appeal, but suffice to say, every assumption they make about modern technology and social conventions makes perfect sense- from their perspective. And "The Rooftop Prince" is at its best when it takes the four Joseon-era men with Park Ha, the straight woman, and puts them in situations where simple explanations are either unnecessary (because it's assumed information) or impossible, owing to the absurdly convoluted turns the plot takes.

The basic conceit of "The Rooftop Prince", that Joseon-era men travel to the future, is a fairly absurd one. But "The Rooftop Prince" takes the inventive step of introducing other absurd Korean drama staples and using them to drive a wedge in the story. Normally these misunderstandings could easily be solved- except that the actual explanations are so much more absurd than the already silly ones still being used that they'd just land everyone back where they started. At risk of being forced into a mental institution.

Unfortunately, the longer the murder mystery plot goes in, the less this absurd dynamic actually factors into the plot. After a time "The Rooftop Prince" starts to entangle itself in more and more convoluted cliched dramatic coincidences, but fails to leave any satisfying hook or twist behind. This left a bad taste in my mouth, and turned a show that was surprisingly innovative with storytelling ideas into one that encouraged eye rolling with the preposterous way events keep conspiring to keep the villains a legitimate threat.

This is another major failing of the drama. The main obstacle Lee Gak and his entourage face initially is their inability to adjust to modern Korean culture. Once this has (mostly) been solved, all we have left for conflict are villains who succeed more through sheer luck and happenstance than because of any particularly impressive scheming on their part. They're just not qualified threats to the main characters unless the leads decide to act stupid for no reason- which they all too often do.

There's another important element at play- the romance. I think the romantic arc between Lee Gak and Park Ha is reasonably well-done, and the actors have good chemistry. This is especially true during the comedic events in the storyline and anytime the two have to share screen time alone for an extended period. The love dynamic between them is fairly convincing as a result. Unfortunately, the dramatic parts of this storyline suffer the same problems as the murder mystery plot. The convoluted nature of the plot is forgivable at first, but as time goes on their inability to communicate and the ludicrous ease by which the villains are able to disrupt the romance starts to grate on the nerves.

Outside of the Joseon quarto and Park Ha, the rest of the cast tends to suffer. No one has particularly compelling motivation or justification for their actions by the end of the series. The villains do at least have clearly defined motivations (though they become increasingly absurd and extreme the more plot contrivances benefit them for no reason), but the supporting cast serves little apparent purpose. If the focus was just on the romance and the murder mystery this would be fine, but "The Rooftop Prince" also sees fit to involve the characters in an elaborate plot regarding corporate espionage and ambition.

This actually might have been an intriguing character dynamic if it had been effectively meshed with the kinds of backstabbing so common in Korean costume dramas- but ultimately control of the company is just a plot backdrop used to fulfill other motives. Granted, this makes perfect sense for Lee Gak and his associates, who have no reason to want control of a Korean company, but nobody else in "The Rooftop Prince" knows that. As a result, the corporate plot is a wasted gimmick- and one that suffers a lot once the overdone plot contrivances start entering the picture.

I don't hate "The Rooftop Prince", but when a show starts out delivering such genuine laughs it's a big let-down when the laughter turns ironic. If you have the time to kill and really want to watch a time-traveling fish-out-of-water Korean costume comedy (which is weird enough I couldn't blame you for wanting to) I suggest just watching the drama until the first time you get really, really annoyed at something. When that moment hits, the rest of it just doesn't get any better.