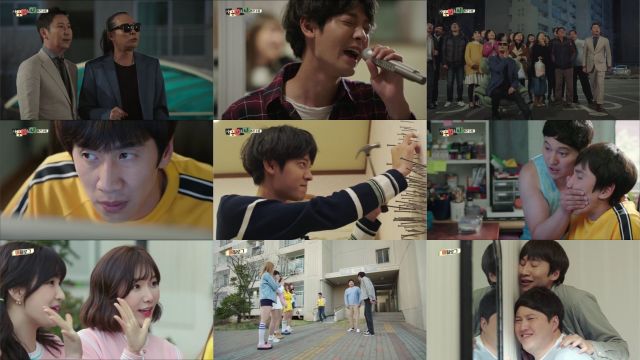 When I first saw episodes seventeen and eighteen of "The Sound of Your Heart", I did not notice that Seok intentionally comes up with a prank to fulfill the letter of his promise to the twins (played by Kim Jong-kook), even when an out is offered. Seok really is pretty dumb isn't he? How does he keep coming up with ways to make the situation worse? Although I suppose it's more impressive that Seok's plans only succeed just long enough to fill an entire episode with gags.

That's the premise behind the two new segments as well. The first one segues from the twin story pretty well- Seok makes assumptions based on his own unfortunate experience of being temporarily disabled. Then he manages to find new bizarre ways to provoke Ae-bong into inevitably murdering him. But, ah, how can I go on to the finer points of plot when that ridiculous image of crazy women in the park keeps popping into my head?

The color design of "The Sound of Your Heart" is really great? Obviously that's an important factor for a webtoon, where bright colors are necessary to distinguish characters. But it would be oh so easy to mess them up in the live action version, and it's to the production team's credit that this never happens. It's always very easy to tell what's going on even when all the jokes are based on comical misunderstandings from other characters.

Which does admittedly get to be a tad repetitive, not to mention difficult to believe. Take the second new segment, the bulk of which involves characters speaking in vague pronouns because that's the only way to keep Seok from being exposed as an idiot who keeps secrets for no good reason. The logical train of thought is so superb, though, I can forgive flaws of common sense pretty easily. And the epilogue is fantastic in the way it just keeps going and going...

Lastly, the third and fourth episodes of the web version of "The Sound of Your Heart" are repackaged here to be...funny. Because it's just more jokes about how thin the walls are, finally hitting a crescendo in the great competition. You know, I'll grant that much as a flaw. Compared to the bite-sized web format, it can get to be exhausting watching so much funny in a row. Jokes can only be so funny when repeated, however perfectly they might have been delivered the first time.

"[HanCinema's Drama Review] "The Sound of Your Heart" (TV Version) Episode 4"
by HanCinema is licensed under a Creative Commons Attribution-Share Alike 3.0 Unported License.