[HanCinema's Drama Review] "This Life Is Our First Life" Episode 10 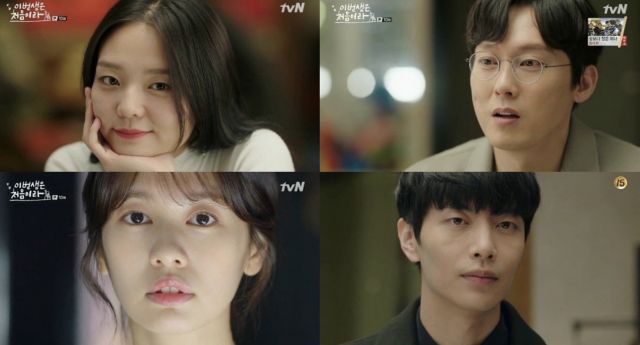 The extended flashback we start out with is more relevant than it initially looks. I mean sure, it's always fun to do those moments of "how did the lead characters first meet anyway", but the whole thing is building up to Ji-ho talking about her dreams as a teenager. In the present day, of course, Soo-ji and Ho-rang have no idea what Ji-ho is talking about. So it's quite instructive to reread last episode's climactic line about Ji-ho liking her husband from Ji-ho's point of view.

More important than that, though, is the revelation that Se-hee respects Ji-ho. That is a very underrated quality in a relationship. It's the main way Se-hee and Ji-ho really work as a couple even if not necessarily in the romantic sense. Ji-ho is a patient person who is easy to get along with. It's little wonder Se-hee's mom likes Ji-ho so much, or how even Se-hee's dad can't be all that gruff when Ji-ho's around.

For the first time we also get a glimpse of positive personality traits from Hee-bong. It turns out that he also likes cats. And also that Se-hee's stiffer more contractual logical thinking actually does seem to derive from Hee-bong to an even stronger extent than was already implied. That Soo-ji and Song-goo have an ongoing subplot about their own contractual dating, which is played entirely for comic relief, further emphasizes how more than the contractual idea itself the tone of it is entirely Se-hee's making.

The Ho-rang and Won-seok storyline is also going strong, as we see events unfold that justify Won-seok's prior reluctance to propose to Ho-rang. Won-seok still is not financially secure, yet Ho-rang is behaving recklessly under the assumption that she's about to be a housewife. That Ho-rang's attitude is totally justified, and that she's dealing with exactly the same kind of sexual harassment issues that Soo-ji was handling earlier in the drama, is simply another layer of delicious ambiguity.

I really love that that every single social issue "This Life Is Our First Life" has addressed, whether it's financial issues, the social value of contracts, philosophical issues of love, filial piety or sexual harassment, all gets addressed at least three times from three completely different angles. None of these discussions intersect directly but we as viewers can easily draw parallels and see how in so many ways different plotlines are just different discussions of the same complex social problems. It's rare to see any drama show this much respect for viewer intelligence.

"[HanCinema's Drama Review] "This Life Is Our First Life" Episode 10"
by HanCinema is licensed under a Creative Commons Attribution-Share Alike 3.0 Unported License.