[HanCinema's Drama Review] "This Life Is Our First Life" Episode 11 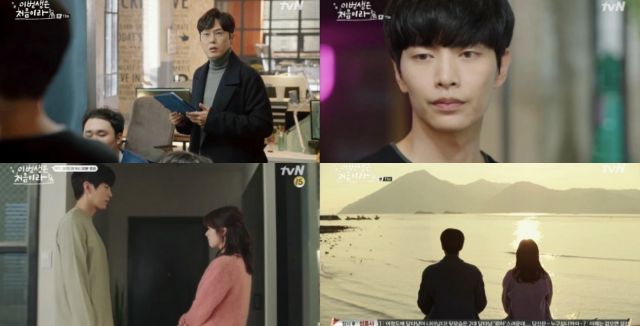 I love how the big situation comedy induced plot twist changes almost nothing, even though all of the immediately involved characters assume that it will. While "This Life Is Our First Life" mainly concerns itself with relationships between men and women, its examination of friendships between members of the same gender are equally illuminating. For all the radical differences in personality, Se-hee/Song-goo and Ji-ho/Soo-ji have very strong friendships.

We can see this spill over into their romantic lives too. It's hilarious how so shortly after Se-hee informed Song-goo that actually, it's really obvious when the bespectacled man is becoming overcome by emotions, we are now seeing Song-goo go into meltdown mode at Soo-ji constantly. Song-goo is not acting mean to her, not at all, it's just that Song-goo will get offended by behavior Soo-ji treats diffidently, even though she probably should be taking it personally.

The explanations as always remain a high point. Funny as it is that Song-goo and Soo-ji just end up having to agree to disagree about the extent she should tolerate ogling, in the end their ability to communicate feelings effectively allows them to hit a reasonable compromise. Also observe how this freedom of interpretation appears baked into their contract, while Se-hee stubbornly insists on interpreting all sub-agreements with Ji-ho as literally as possible.

Another high point is when the action moves into the countryside, mostly because I always love seeing more of Ji-ho's dad. He's very loud, and friendly, and intimidating. So are all his friends. For all the beauty of the oceanside Se-hee is visibly uncomfortable throughout the entire experience. That Se-hee chooses to endure the discomfort anyway is a pretty obvious clue to the big climax, which isn't exactly a surprise since it was in the last preview.

"This Life Is Our First Life" is the rare drama that's so good it even manages to erase the need for unpredictably. Even though I know exactly where all of this is going (spoiler alert: happy endings for everyone), it's watching them struggle to make that journey which is the real pleasure, not any sense of surprise. All three of the main couples see ultimate happiness as being, fundamentally, a problem which needs to be solved somehow and are going after that problem in radically different ways. But note how none of the six wildly different paths to success are obviously right or wrong. They have their up days, and their down days.

"[HanCinema's Drama Review] "This Life Is Our First Life" Episode 11"
by HanCinema is licensed under a Creative Commons Attribution-Share Alike 3.0 Unported License.