[HanCinema's Drama Review] "This Life Is Our First Life" Episode 15 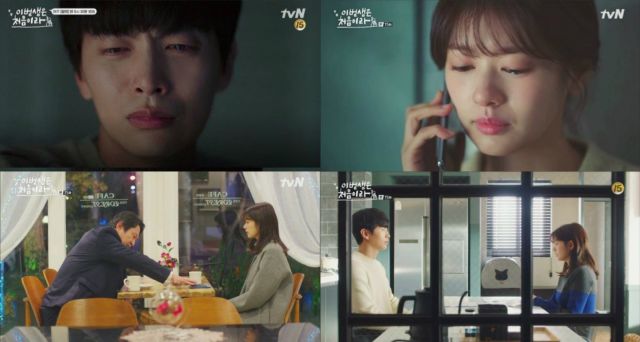 Ji-ho is so obsessively introspective here she effectively manages to talk herself out of a relationship with Se-hee. Her behavior is dumbounding, but at the same time, really weirdly logical. I can actually kind of see screenwriter Yoon Nan-joong inserting herself into the more philosophical contours of the conversation, openly wondering why the consumnation of romantic love has to be the only acceptable narrative happy ending. That Jeong-min is, herself, an example of a woman who achieved happiness without a man only further complicates this assumption.

Of course, Ji-ho herself is obviously dumbfounded by Hee-bong's completely counter-intuitive reaction to the revelation that Se-hee and Ji-ho's marriage is a sham. Ji-ho, like Se-hee, appears to have decided that Hee-bong's approval is something that should fill her with shame because he is so obviously a disgusting person. Who also loves cats. Geez, "This Life Is Our First Life" really doesn't want to give us any obvious answers does it?

This is especially true come the ending, when we are given what I consider to be the most single-heartbreaking cliffhanger in recent memory, or possibly ever. Lee Min-ki has always been excellent in the lead role, but his full on breakdown here is something that really has to be seen to be believed. It's like Ji-ho crumpled him into a little ball and tossed him into a trash can. The worst is, Ji-ho herself is so self-satisfied with her logical thinking she has no idea what she was wrought emotionally.

The subplots are a major relief compared to that even in their most difficult moments. Now that Soo-ji's mother is an active character, she can confirm what we've suspected- that the sexual harassment Soo-ji has been enduring at work has been a lot more deleterious to her mental state than Soo-ji has been willing to admit. No wonder Soo-ji doesn't like the idea of Song-goo meeting her mother- they have a lot to agree on.

Elsewhere, "This Life Is Our First Life" continues to seriously toy with the idea that Ho-rang and Won-seok are not getting back together, since an opportunity for them to do so just fumbles off into awkwardness. Realistically speaking, I know that whatever Ji-ho's protestations, it's kind of unfathomable for a romantic comedy drama to end without its main couples getting together. All the same, it's a testament to the dramatic tension, the scripting, and especially that last scene that this prospect is actually pretty scarily plausible here.

"[HanCinema's Drama Review] "This Life Is Our First Life" Episode 15"
by HanCinema is licensed under a Creative Commons Attribution-Share Alike 3.0 Unported License.