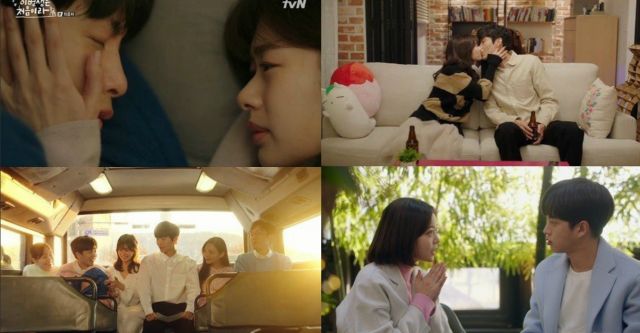 The fuller context of Ji-ho's actions makes her look really dumb, at best, and actively sadistic at worst. How in the world was Se-hee supposed to interpret her behavior? The only justification I can come up with is that "This Life Is Our First Life" is satirizing what would actually happen in real life if one member of a couple just disappeared like that without communication. Except Ji-ho is never called out for the tangible and emotional damage her actions caused to Se-hee's life.

While Ji-ho's straight up abandonment of Se-hee is definitely the most infuriating plot point, the resolution of Ho-rang and Won-seok's storyline is at minimum just as badly muddled. Observe how, right up until the last minute, Ho-rang and Won-seok are still completely incapable of clearly communicating what they want and how they feel. This even gets played off as a joke. No, no, no. They need to figure how to talk to each other, or else any marriage simply won't work.

Luckily the Soo-ji/Song-goo storyline manages to end in a fairly satisfactory manner. Its big punchline is actually pretty funny, because it typifies exactly the kind of pragmatic thinking toward marriage that has been repeatedly discussed throughout the drama. Even just the way Song-goo always asks for clarification in the event that he has possibly misunderstood Soo-ji is very cute. It indicates that Song-goo is being considerate.

All the same, for "This Life Is Our First Life" to only succeed in depicting one of its three couples as convincingly being in a healthy relationship is...not good. I mean honestly I can't be too harsh to the drama overall. "This Life Is Our First Life" has been so consistently brilliant throughout that a failure to properly stick the landing hardly ruins the entire story to date. I'm just disappointed that the drama was so close to being perfect, and missed it.

Because honestly? I could see Se-hee giving up the townhouse as being his big significant moment. It would symbolize his willingness to accept that there is more to life than having a nice place to live, and start the healing process with his father since without a nice house, Se-hee has no reason to need Hee-bong's money in the first place. But there was absolutely no reason for this development to be inspired by Ji-ho behaving so stupidly and selfishly. Se-hee and Won-seok should not be begging for forgiveness when their partners were the ones who screwed up.

"[HanCinema's Drama Review] "This Life Is Our First Life" Episode 16 (Final)"
by HanCinema is licensed under a Creative Commons Attribution-Share Alike 3.0 Unported License.